Across the world and back again: holiday adventures in north america- post 2

For those of you clinging to the edge of your seats, hoping desperately to receive news on how my holiday progressed post-limo, you will probably be disappointed. Sorry in advance. For those of you with slightly lower expectations, I am hoping you will find this post pleasantly delightful (also sorry for the delay. Due to ‘the internets hate me’ syndrome that I commonly experience from my little corner of Congo, I had to start this post over about 10 times because every time I saved, I ended up losing everything. Needless to say, I became a little, ahem, exasperated with it all, and needed to step away for a bit, for sanity’s sake…).

So yes, after managing to arrive in New York City as faux rock stars, we started our evening with sushi (guess who started that movement, cough cough), and even my Congolese colleague tried some (and by that I mean, he definitely put on a good game face, but impressed he was not. In fact, I think I saw a little bit of terror in his eyes. Raw fish can be scary, its true, and after the first bite, he politely declined.), which soon just devolved into a drinking evening. Which is probably what one should do after a few days of work meeting, and when one finds oneself in New York City with a lot of friends. Actually, thinking through the whole experience, this is actually a pretty standard theme for my holiday, so don’t mind me if I forget to bring it up again, lest I sound like an alcoholic…

New York was fabulous though (at both ends of the trip). I got to see Broadway shows and walk the High-line with one of my best friends from university and another good friend who I know from Haiti. I got to wander Brooklyn haunts (night and day) with a friend from Congo, had one of the best nights out dancing in recent memory, and was introduced to the culture of brunching. I reunited with friends from New Orleans at a well-timed birthday/housewarming party, and stuffed myself silly with piles and piles of delicious foods (Dear New York, your portion sizing is impressive if you don’t mind me saying so).

Its easy to marvel at high buildings, traffic, and art, when you’ve been spending time in a completely different environment in general, but where this city is concerned, I don’t think I’ll ever really get over it. Whenever I’m in New York, I want to move there. Like immediately. I wonder how long it would take me to stop being impressed by it all if I did (or if I ever would).

I kept taking photos of dead-looking plants on our hi-line walk. I thought they were pretty…

I very much enjoyed this particular drip coffee experience

More cool plants on the high-line 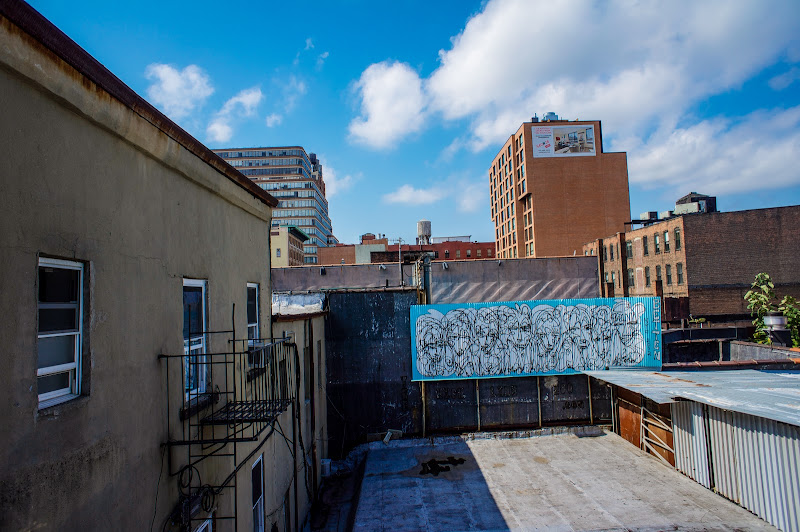 I loved all the little art pieces 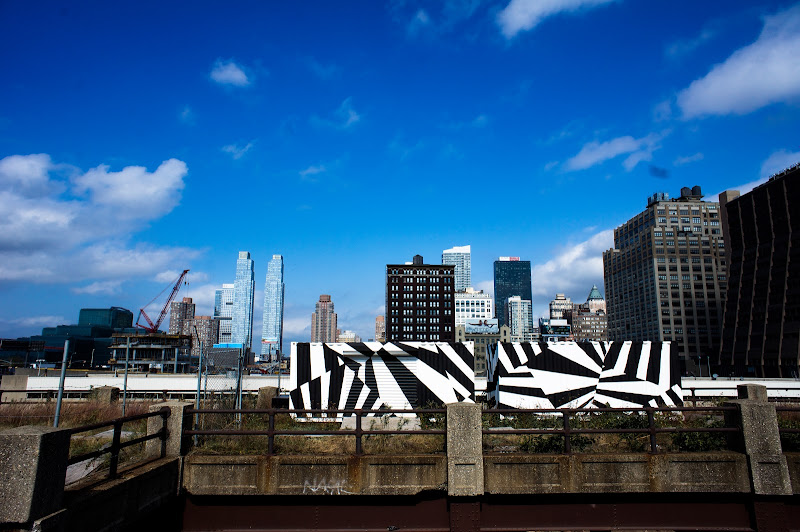 Of course, the gorgeous blue skies didn’t hurt either

I spent awhile looking at this guy. Some people may have erroneously assumed I was thinking deep thoughts about it, when actually I was mostly imagining why I might suddenly one day choose to make a giant billboard of a very constipated man. I can’t remember what my conclusions were regarding this.

It was strangely a nice day to be in Times Square. Also, I like watching people.

We spent a long time trying to sort out what the sky writer was trying to say here. We never did figure it out.

I was uber happy to see this one. I wish we’d had more time together. She is sort of the best ever…

This man was the most amazing out of all the Park People. I took so many cheeky photos of him. It was something about him though. He just seemed to have it all figured out or something.

So in between wonderful New York visits, I spent a lot of time hanging out in Canada-land; Toronto and Montreal to be exact. I have now decided I would move to both places, without question (yes, yes, I am a very fickle place-choser). During this time, I also got the chance to visit one of those natural landmarks that is uber important to both sides of the border- Niagara Falls. Luckily (or so I am told), I was visiting the Canadian side, which is meant to be much prettier.

This natural landmark is of course many things, including beautiful, humbling, magnificent, all that, and etc. What people did not tell me before visiting, however, was what the area of the town directly surrounding Niagara falls was like. So here I am, a person who’s been hidden away in village life in the middle of mostly nowhere on the other side of the world, where electricity is often hard to come by, and what am I met with? A gigantic theme park town from the 1950s.

I mean, it was amazing! And absurd. And ridiculous. And probably completely unnecessary. But, I couldn’t get over it. It was like arriving in a movie and having absolutely no clue how you landed there. I sort of loved it in a like ‘I have arrived on another planet’ type of way. 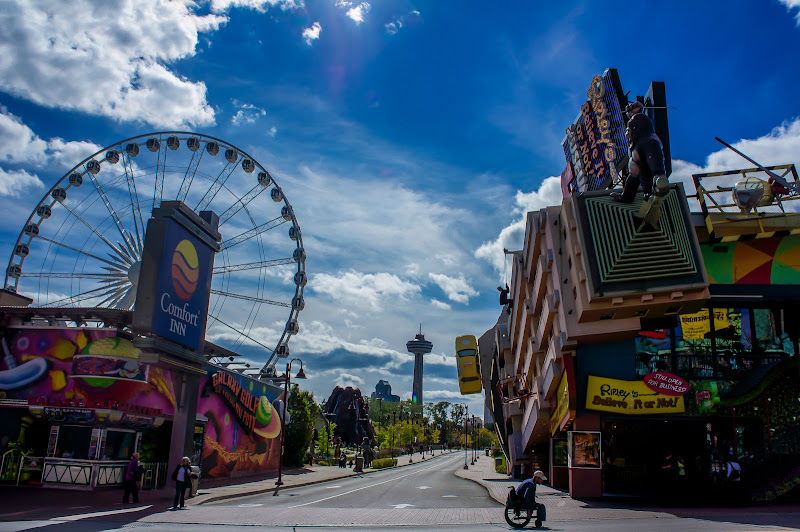 I mean, does this not look like some weird bizarr-o dream world to you?

I really wanted to be involved in this situation. Dinosaur mini golf= GOLDEN in my eyes, but I was trying to pretend to be cool…

I probably could have spent the entire day staring at all the shiny things. Of course, I didn’t want people to realise how out of touch with reality I apparently was. Also, the fact that I couldn’t decide if this was actually anything like reality or not worried me slightly, so I reckoned that just biting down on my ridiculous propensity to say silly things in odd moments was actually the best policy, and so I just let myself be ushered instead towards the real reason for the visit: The Falls.

And I am so glad we moved out of the realm of 1950’s carnival world, and towards the falls. They are amazing, and beautiful, and impressive, and I couldn’t get enough of photo taking. As evidenced here.

what a perfect day.

Jacmel reunion at Niagara falls. How much more awesome can things get!?

The Maid of the Mist approaching the falls.

Rainbows at the American Falls

Tunnels underneath the falls

getting soaked. But at least they have their stylish ponchos on.

Ponchos are the new cool. As evidenced by the fabulous modelling going on here. Now a number of villagers in my small town in Congo also are sporting these.

We didn’t do this, but next time…

From the tunnels behind Horseshoe falls. That’s the end of waterfall pictures. I promise. Sorry for the overload. There were a lot more (like A LOT MORE. This was the incredibly scaled down version…).

So after the falls it was another trip back through la-la land, which of course meant I had to take a couple more photos to document things.

Such a weird place.

Yeah…. does anyone else understand what’s going on here? 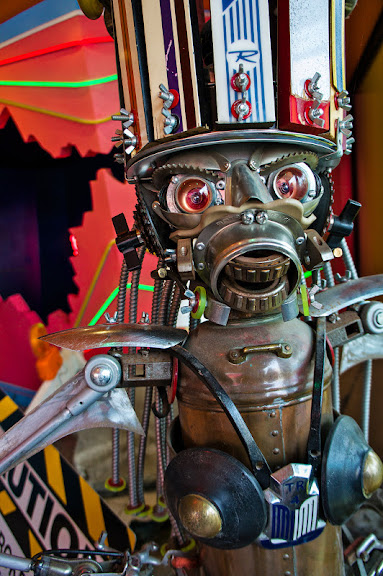 I love this guy

Anyway, with that last photo of some sort of robot dude that probably serves no comprehensible purpose, I will just end this post (finally), by saying that once again, I had an absolutely fabulous trip. Sadly, however many weeks later it now is, it all seems a bit like a dream. Upon touchdown in Congo, I wasted no time in immersing myself in a lot of work, work, and more work, dealing with worsening security crap, and a general lack of photo taking time. This will be remedied. There is no choice here…

Trying to move back to a state of normal in Goma. »
« Across the world and back again: Holiday adventures in North America- post 1

2 thoughts on “Across the world and back again: holiday adventures in north america- post 2”