On Monday, I indirectly got hit by lightning. 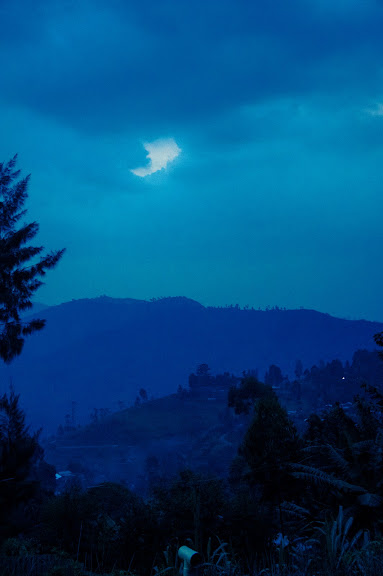 The view from the base on a NON stormy evening

On Monday I indirectly got hit by lightning. True story. Yes. What a way to start one’s week, right?

In the afternoon, on Monday, we started getting deluged by certifiable monsoon-style rain. You know, the kind of rain/instant-swimming-pool-soaking that makes everything soggy and damp even if it never left the somewhat safe confines of an enclosed structure. And it wasn’t just rain, but a storm that brought with it massive and deafening thunder and lightning, which basically continuously lit the prematurely dark sky, and made me jump out of my seat despite myself with almost every booming clap.

For some reason, even with the violence of the storm, I wasn’t exactly thinking straight. We’ve been so busy the past few weeks, that I was mostly just trying to get work done, and go about my day normally. It didn’t cross my mind to unplug things…

Suddenly, at exactly the same time, the lightning flashed, and the thunder crashed. The light in the window facing me was blinding, and startling enough that I semi-jolted away from my computer. This was probably a good thing, as the hand that did stay on the keyboard instantaneously received a huge current of electricity, which pushed me (safely ensconced in my roll-y chair) hard into the wall.

And that was that. I actually didn’t have too much time to think about what had just happened. After a dazed moment or two, I realised that downstairs someone was yelling, so I sort of rubbed my hand and shook it a bit (the rest of my arm had medium-level pins and needles tingles going up it) and went to see what was going on.

Apparently the Lightening Event, which we have determined to be a lightning strike that hit us as well as the NGO next door, caused flames to roar up in both radio rooms (where we have a million things plugged in). Luckily our operator is smarter than me, and had turned most things off, so no one was hurt, but he did run halfway across the compound to get away from the electrical fire (once again, smart guy).

After reporting the incident to my boss, I was ordered down to see some doctor friends for an evaluation (under the threat that otherwise I would get sent to Goma early the next day). I had strangely a lot of energy, even hours later, as if I was tapped into a constant supply of extra-jittery adrenaline. I also felt weird, and my chest felt heavy, as if something was sat on top of it. I didn’t think I was dying or anything though, so the whole being required to see doctors (who are also my friends) made me feel rather stupid (and yes…I’ve been told I don’t make a good patient…). Anyway, the EKG at the hospital hasn’t been working, and I had neither electrical burns nor any other super worrying signs of impending trauma/heart failure, so I was sent home with a ‘get 24 hours of rest’ prescription (ummmhmmmm. I’ll pretend that was going to be likely). I should probably also note here that in order to get to said doctors, I went with a friend from the other lightning affected organisation, as well as her car and driver. And the roads were bad. Which brings us to the next chapter of this little tale.

When I talk about bad roads, I should also explain a bit about the town in which we live. It is built on an extremely steep hillside. The roads are narrow, made of mud, and lined with clap-board shacks. People always bustling around selling their wares, etc, and generally paying absolutely zero attention to cars trying to pass. When it rains its like the entire hillside just melts, and there is mud everywhere. When I say everywhere, I mean everywhere everywhere (I am not looking forward to the next few months of rainy season (which is most of the year in this area). I am pretty much covered in mud at all times already- not helped of course by the oversized puppy terrorising us all with her extremely dirty paws, always slightly sodden, and often cold. It makes one constantly just feel just a bit gross).

Anyway, we barely made it down the hill for the visit (it would have been easier to walk, albeit filth-inducing, but with security regs as they are for that time of day, it wasn’t possible). The roads were bad, and a certain NGO who will not be named (although I’d really, really like to), in a particularly selfish move on their part, managed to park (i.e. get stuck) their entire fleet of enormous transport trucks through the worst section of the road (the only people to have vehicles here are the NGOs with maybe the exception of the ministry of health).

On the way back, we weren’t as lucky. The land rover ended up stuck in an EXTREMELY high ditch/trench, having broken the little cement block that was supposed to reinforce the mud road. Another car, driven by some small visiting evangelical NGO based out of Goma was also stuck. After hours of waking up the entire community try to get things unstuck (it wasn’t that late, but when you have no electricity, you go to bed early) and mobilising half of those we woke, we managed to jack up one side of the car with the magical ‘high-lift,’ pile rocks underneath, which we took from a different section of road that the community had already worked hard putting in place in order to try and keep this from happening in the opposite ditch.

Eventually we got thing raised up enough, that 3 hours later with the help of a second land-rover from my friend’s organisation, we were able to winch/pull the truck out with a combination of brute force and positive thinking. Then we pulled the other vehicle through, and headed back home (after having already broken curfew of course). I was fairly soaked through and so disgustingly covered in mud that I took a freezing cold bucket shower before going to bed. Unlike my normal sleep patterns, after all the excitement and the electrical shock, I passed out dead to the world until my alarm went off at a later time then usual the next day.

The next day I felt fine. My heart sort of hurt (if that makes sense) and I’m still exhausted, but I don’t think there is any major damage. The jittery-ness is also gone and my ability to speak French (such as it is) has returned (after the electrocution it slightly escaped me for awhile), and the car we got stuck last night (which was my fault since I was the one who needed it. Sigh. I feel fairly horrible about all of that) is fine after some small maintenance.

Anyway, our internet is still out from the whole matter, which makes things a bit weird getting work done-wise (I’m now using someone else’s internet to send this), but hopefully it will all be back to normal soon. We’re also installing an anti-lightning rod to discourage this type of comportment by storms in the future.

But what I want to know is this (and which is pretty much the most important part of this entire story)- Does this mean I get to tell people I was hit by lightening in the Congo?

Luckily, I have this face to keep my company. Even if she has turned into the biggest little thief and trouble-maker ever.