The last number of days have been days of firsts and many adventures and I’ve enjoyed them immensely.

Thursday morning, I met most of the Shakers cast at the Geneva airport to pick up the car that we would be taking to Germany. We got upgraded to a Mercedes because we thought a SatNav might make the trip easier/more successful. I was driving as I wouldn’t be able to help out on the drive back. It was my first time driving in Europe (and my first time driving a Mercedes). I don’t know what I was hoping for, but all I can say is that it was mostly the same as driving anywhere else (although driving a Mercedes does= smooth ride). Because it was a public holiday in Switzerland, our plan was to drive up into the Alsace region of France, hang out in this little town called Colmar, wander about, and drink wine. We had heard it was nice. Well, on the way there, we found out that we appeared to be likely terrorists/smugglers. At the border post, where I have never been asked for so much as ID before, we were interrogated- Where were we coming from? Where were we going? What were we doing in Colmar? How long would we be there? Did we have anything to declare? I answered all these questions. They were then asked again, and answers were repeated. We were then asked to step out of the car, hand over our passports, take all our bags out of the car, and bring them inside the station to be searched. Yes. Searched extensively. It was awesome, especially as I was packed for my theatre adventure and my NOLA adventure. At least my shampoo bottles didn’t get the rockstar treatment that Chantelle’s did. They were run through the x-ray machine. Twice. They were then opened and visually inspected. Apparently she looks like the type to smuggle things in Shampoo. Sort of amazing. After all the excitement, we finally arrived in Colmar. It was a cute little town, and almost bursting at the seams with historic stories to be told. It was raining and a bit cold, but we enjoyed the adventure anyway, celebrating at a restaurant boasting hundreds of witch dolls hanging from the ceiling. 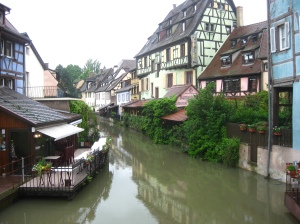 One of many gorgeous views 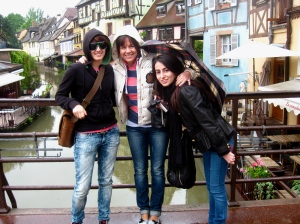 After Colmar, we headed back to Basel for the night. It was to be Shabnur’s first time in a hostel (well one that wasn’t in Dubai and therefore uber posh). I think it perhaps frightened her slightly (as she may have mentioned multiple times that she was going to stay awake all night in case someone broke into the room), but she was a trooper, and after a night out on the dancefloor, she had no troubles. And yes, what a night out it was. There may have been a trip down a path near a river to find the club, a massive massive cue to get in the door, some mostly hilarious hip hop, and a lot of me pretending to speak Swiss German, only to give up and pretend that everyone there spoke French instead. We also met a new heavy metal-loving friend who was pretty amazing and fun, and we perhaps drank a little too much booze.

The next morning was, shall we say, a delicate time for all of us. What we wanted/desperately needed was a big greasy breakfast to soak up last night’s woes, but as the Swiss do not love breakfast in the way it was intended to be loved, we settled for what we could get- namely a small sandwich and coffee. I am proud to say that we were rockstars enough to wander around all day, despite the hangover exhaustion and cold. That evening we collected the final Shaker’s girl, and we were off to Germany. 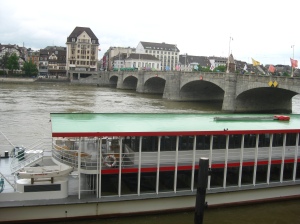 The one photo I managed to take in Basel...

I was at the end of my strength by the time we arrived in Bad Homburg, mainly due to my annoyance at the traffic we encountered, but supper and a decently early bedtime made everything in life better by the next morning.

Bad Homburg was great. We got to wander around the cute little town and enjoy the festivities and open-air shops. We also saw some interesting plays, danced to some pretty amazing disco with our slightly inebriated director, and had an absolutely amazing show. 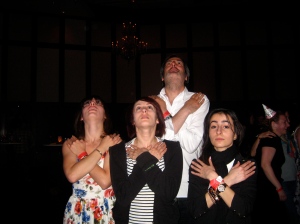 Dancing to Queen at FEATS

We came in third, which was pretty awesome, and super unexpected. Well, actually, we came in 2nd, but due to the fact that we went over the 50-minute time limit by a minute and a half, we had points deducted and therefore went down a place. Regardless though, third is pretty exciting. I also got nominated (but didn’t win) best actress. That was also super exciting. The best part though, was how much fun I think we all had. I’m really sad the show is over, and can’t wait to get back to Geneva (I know, shocking) and start preparing for the next one.

Some ‘Shakers’ photos from a dress rehearsal: 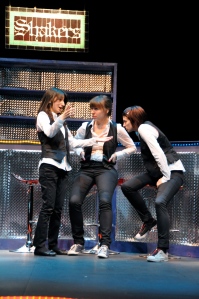 And one from the Shakers karaoke night out after our last Geneva show: 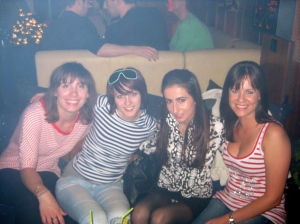 The day after judging I had an early wake-up (as did the others), and started off in the direction of my NOLA adventure. I successfully made it to the airport (there was some iffy moments when the train ticket machine refused to accept my card, and I didn’t think I had enough cash, and there were no cash points around, but luckily I have too many coins of many types floating around in my bag…), and after rushing to check-in and get to my gate, I waited. And waited. I was lucky that my plane was not going through Amsterdam as I previously thought (only on the way back, because the Ash Cloud was back with a vengeance and shutting down airports and flights everywhere.  Unfortunately, however, this meant that flights were also delayed everywhere as airlines scrambled to re-route people to get them to their destinations. By the time my flight finally landed at my first layover, I had already missed my connecting flight. This meant that I got to take more flights than originally planned and arrived in New Orleans pretty late in the evening. I was also shattered. As in, I planned to go out, but couldn’t make it past one delicious blueberry mojito and monosyllabic responses as my sole means of communication. When I hit the pillow, I was out like a light.

Notes since arriving in the States:

It’s strange how a place that was once home can so quickly seem foreign; Being surrounded by American voices has become jarring and disconcerting, ordering food in English is now weird, the levels of obesity in people around me outrageous (as are the food portion sizes), and fighting the constant battle to say ‘thank you’ and ‘excuse me’ instead of ‘Merci’ and ‘pardon’ is laughable. Above all though, I already feel out of place here, as if my time has past. It doesn’t mean I won’t have fabulously wonderful adventures, but it makes me sad. I’m sure this will change after a few days of acclimatisation but it’s still hard to grasp.

I haven’t yet had a chance to see the boys (i.e my gorgeously fuzzy fuzzy beasts). I’m hoping my friends who are watching them will be home soon, as I am desperate to give them a squeeze. I can’t believe they will soon be moving back with me!

Tomorrow I will be going with a couple of friends to Mississippi (yes, yes, I know. I will attempt to come back alive) to do some volunteering dealing with the oil spill, which I think will be a worthwhile (and likely much photographed) adventure.

Right now I’m sitting at one of the coffee shops in the Quarter that I love, enjoying the soft damp breeze floating in through the open French doors, and watching the now deserted streets in front of me. The sky has turned dark despite it not being that late in the day, and the clouds have opened. Thunder rumbles, the sky flashes, the rain hits the pavement hard, and its staccato melody makes me remember again how much I love this city. My time may have past once, but I hope one day to make this place mine again.

The journey »
« Fuelled by caffeine, sleep deprivation, and Haribo frogs.

One thought on “Recent adventures in multiple countries”