Well, I’ve made it from Germany to New Orleans to Florida and back again to Geneva, with barely a blog post to mark it by. I apologise, but I was busy, and I need a lot of distraction-free time to make these things happen. I did do a fair bit of writing along the way, but most of it is personal enough that I decided to just hit some of the highlights and add some photos. So here goes:

A week or two into my NOLA trip:

New Orleans is one of those places I have to come back to. Maybe I should settle here. Maybe I can’t imagine why I’d leave again. Right now, at the coffee shop where I am typing this, one man is dancing along to the music playing on the radio as he waits for his coffee, another is dressed in a top hat, grateful dead t-shirt, holographic sunglasses, and bright red lace up Doc Martins, one normal looking guy is having a conversation about getting help to sweep the bad spirits and ghosts out of his house, and everyone greeted me with hellos and smiles when I came in.

It’s currently boiling hot. The shower I took this morning, basically served no purpose, and the humidity is trying it’s best to melt my brain. But, the sun is shining, people are happy, and life continues on despite it all. People who grow up here don’t leave, or at least rarely do. Its because people love where they’re from. I have never been somewhere where the native population is so fiercely protective of their home. When I tell people that I live in Switzerland, people say politely that it sounds really nice there, they nod their heads and listen with quiet interest when I tell them about my life, but as soon as they’re given the chance, they interject with, ‘I’d love to go and visit, but Geneva’s not New Orleans.’ No. No it is not. I’ve already given my heart over to this city. It’s become an important part of myself. I don’t know that I’ll ever feel something of the same nature in Switzerland…

On the other hand, this trip has been decidedly bittersweet. I don’t know what I expected but it hasn’t been that. Many of the people that really helped make my time in this city special are leaving or have already left. Those who remain are in transition periods themselves. Pretty much no one has time for hanging out. It’s been a hard reality (i.e. the world doesn’t revolve around me), and I’ve been trying not to get too down about it. If I was here as part of a permanent move back and not just a visit, I don’t think it would even be an issue to me. I probably wouldn’t expect as much, and I’d slowly re-integrate myself or make new friends and that would be fine. But being here for only a couple weeks, this has made things hard, and I’ve been forced to re-evaluate expectations and myself.

The best moments of New Orleans:

1. Being finally introduced to Hansen’s on Tchop. I mean, I’d had snowballs before (and quite a few after while still on my visit), but these were definitely the most amazing. Ever. I really sort of need them to also exist in Geneva. Do you think they could somehow be packaged and sent to me here?

Hansen’s snowballs- everything about this place is amazing

2. Randomly going to see Rocky Horror Picture Show at the Prytania Theatre (the oldest operating cinema in New Orleans), and getting volunteered to be their stand-in for an absent Rocky. Fortunately (or unfortunately) there were no photos taken, as I mostly made a fool out of myself while dressed in tiny amounts of skin-tight gold lamé. I really wish I had seen the film since last October-ish, but as I mostly had to stand around, look pretty, and flex my ‘muscles’ I felt like I managed as best as could be expected. I only wish they’d had a blond wig.

Rocky Horror Virgins (i.e. Jenn)- the only photo I have from the Rocky Horror section of the evening. 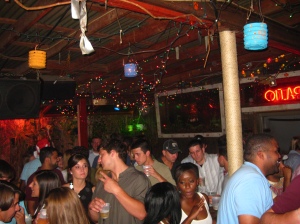 Our exploits at F&M’s earlier in the evening

Amazing T-shirt made by an amazing certain someone from BaybeeGee! BayBeeGee.etsy.com

3. Hanging out in some of the city’s finest coffee shops. I didn’t hit them all, but at least I made it to Zotz, both uptown and magazine street Rue’s, and Envie various times.

4. Eating A LOT of sushi. It was necessary.

5. Going out to Grand Isle to fly kites map the oil spill.

I may have been obsessed with these houses along the way. 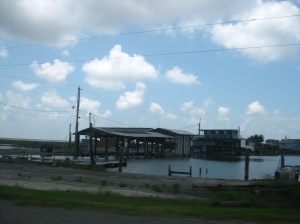 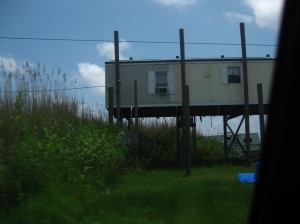 I was having hard time getting a good photo of these from a moving car, but I was sort of in love with them! 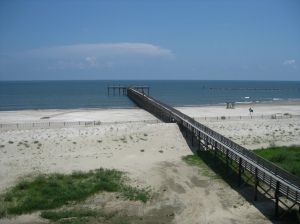 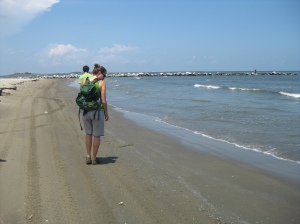 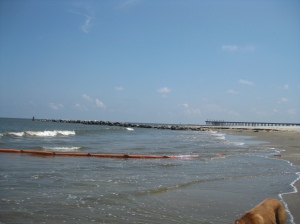 We found loads of dead catfish along the beach. They squirted oil when you pressed on them…

Another dead fish. We also found a lot of tar balls. Visible oil starting washing up on the shore the next day

7. Dancing at the pub (i.e. hearing hip-hop music for the first time in months) (and seeing many of my friends perform)

8. Bubble tea (even if they didn’t have jellies [sigh], which is far FAR superior to tapioca)

10. Going to the best book shop in creation (other than Powell’s of course) Arcadian Books and Prints. I could spend all day there among the smell of old bindings and much loved books. It’s on Orleans Ave. for anyone hanging out in the City, and it’s full of used books and other amazing things, piled in eclectic, tottering towers that reach literally to the ceiling. Every time I go in there I knock things over in my usual clumsy fashion, and in the process I also find some real treasures. This last visit included a trip to their toilets. Can I just say it was like going spelunking in some magical cavern to get there, and then the bathroom itself was exactly like you’d expect? I’m pretty sure that that place can’t get any more charming in my eyes. 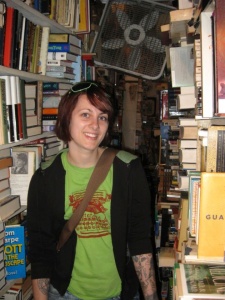 11. Wandering around the Quarter (I don’t think I’ll ever stop loving that place) 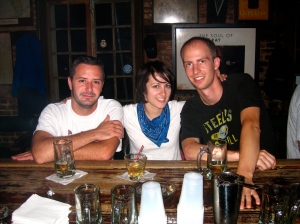 With Scott and Peter at a bar in the Quarter, where I finally got some whiskey in my life

12. Walking in Audubon Park with Jo

Lizardy friend on a bench 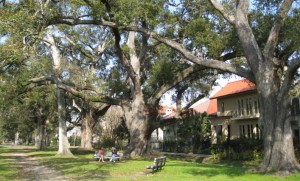 Can’t help but love the oaks 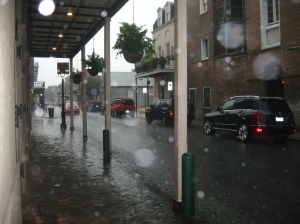 The Downpour as seen from Envie

14. Crossing Tribute off my list as a place I need to spend time in.

15. Talking to and seeing friends

16. The last minute BBQ on my last night (all those from Pensacola who made it to the marathon last vacation event- we are officially rockstars).

17. Tiring out Joon Bug on some crazy walking adventures

18. Number 18 is for all the awesome things that happened that I’m accidentally forgetting to add here.

I also did a lot of boring stuff like studying, getting cats ready for international voyages, taking care of loose ends I left flapping in the breeze, and doing a lot of reading.

There were also a lot of things I didn’t get to, which was sad. They must be taken care of next time I visit. These things include (so that people will be prepared) include:

2. Real bubble tea (you know, the kind with jellies because I’m amazing like that)

3. A trip to the Pirate Bar (for vampires and absinthe of course)

8. Karaoke (my main karaoke partner was sadly indisposed due to important things like getting his PhD)

So I went to Pensacola. It was fairly fabulous. The sunshine was needed, the people were great, and I really had a chance to just be me. My days there were characterised by hanging out on our various ‘boats,’ people watching, applying as much sunscreen as humanly possible (twice), pretending to understand some of the thicker southern drawls with often hilarious results, and hanging out with amazing people. My nights were full of dancing, drinking, debauchery, truth or dare, more boats, and various other adventures. I stayed in a house with up to 15 other people that had it’s own little private beach overlooking the bay (a-ma-zing!). I think there were many of us who didn’t want to ever leave (fact). Even though many of the friends I saw there were newer, or brand new, it might have been the best part about going back to New Orleans, even if we were actually in Florida. The trip + the people really gave me a chance to be myself. I feel like I spend a lot of my time in Geneva holding back and never quite relaxing. With everyone in Pensacola, I finally got the chance to do that, and it felt fabulous! So thank you everyone.

The main things I learned in Pensacola:

1. I’m better at dishing out on truth or dare than I realised.

2. Next time I’m going to come prepared with amazing boats

3. I miss all you fabulous fabulous people, and I need more of you in my life.

Here are a few photos to commemorate the trip: 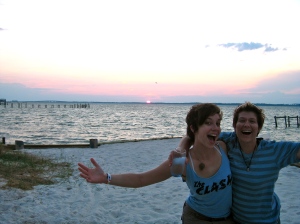 Enjoying the beach from our house!

Sunset on the bay

Blowing up the boat (aka kiddie pool) 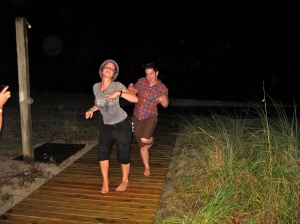 Our new boat (i.e we jumped into the bay and ‘rescued’ it when it was floating away) 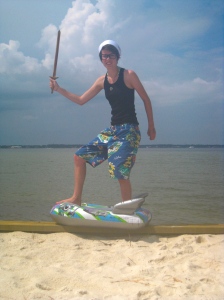 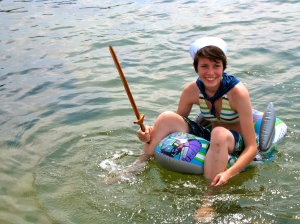 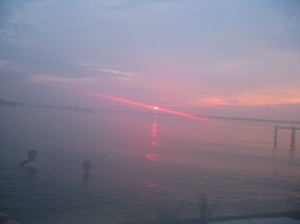 Sunset at the Mothership

Some of the gang at sunset 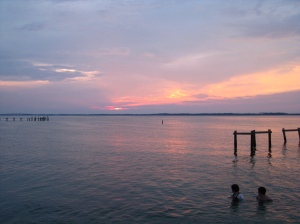 Watching from the bay 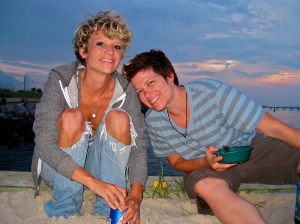 Hanging out in another boat 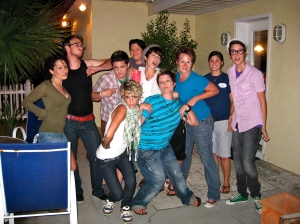 The gang before going out as gay chickens! 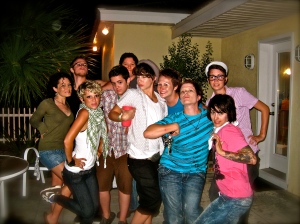 The gang one more time

Because we needed to stop for sailor hats 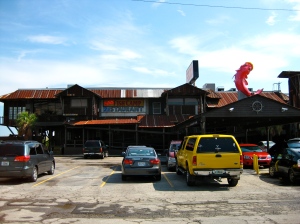 Some of the best parts of the trip:

2. Playing in the water (unfortunately it seems that Pensacola is now being hit by the oil spill… Sad sad day. http://www.vancouversun.com/news/Florida+coast+suffers+first+impact+from+spill/3112240/story.html)

3. Getting to know some wonderful people better, and reconnecting with friends

6. Dares including: Queen Latifa, Chicken Burlesque, the fashion show, the Dance off, and others. So many others

Yup, basically it was a pretty much amazing trip, and I’m already missing everyone. I love you New Orleans, find me a way to come back!

One thought on “The journey”