Life in Jacmel: photos, observations, and some meanderings.

Today I woke up at 3 am and couldn’t get back to sleep. I thought at first this was due to the fact that my room felt slightly stuffy and warm, but then I thought it might be because I’d finally been formally introduced to Haitian rum and as happens whenever I drink, I wake up a lot in the night. But then I realised what it actually was; it was quiet. Like completely and utterly, blanketing, still. Not even one of the many confused roosters, located of course in strategically placed positions around every single window was trying to crow in the ‘morning,’ despite the fact that it was more likely to be any time of the day/night but morning. There was no constant blaring of horns, or motorbikes speeding up the street sans muffler, you know, to appear extra cool. There was no one shouting away for no reason in particular. I couldn’t even hear a cricket. So I lay awake in bed until it was time to get up. First, I just listened to the quiet, and then I listened to the stirrings of various creatures as the sun rose and they began to start their day.

I’ve been putting off writing this post for days now. I’ve wanted to write. I’ve had a million things to say, but then it would just get too overwhelming (plus work takes up the majority of my waking hours and the internet generally hates me, sooo…. yeah), and I’d put it off for another day. Now, I also have a million photos to post, so of course it’s even more overwhelming…. Sigh. Oh well, as this is the only way  get to sort of have contact with most everyone, I guess this means I’ll write a long post. And probably forget 3/4 of what I wanted to say. But at least I’ll add in a bunch of photos to sweeten the deal.

So, I’ve been in Jacmel for almost 2 weeks now. We’ve moved out of our hotel, and into an apartment. And it’s fabulous. We’re no longer staying on beachfront property, but I think that a mere 2 blocks to ocean views is fairly reasonable… We’re also basically in the thick of things, town- wise, and I’m once again surrounded by the type of architecture I found so appealing in New Orleans (in fact, I’ve been told that the buildings here in Jacmel were the inspiration for the ones there. Which, I find pretty cool). Things here, are of course more run-down than in New Orleans, and as this was one of the places hardest hit by the earthquake, many buildings that were once beautiful (if decaying) landmarks, are now just piles of rubble. This was a World Heritage Site, but no one’s coming in to restore it to its former glory. They say that this place is too corrupt, and too disorganised. I say it’s a huge shame. It’s absolutely beautiful here, and it could be even more so if people would just give it a chance.

Below are some photos from around our new home: 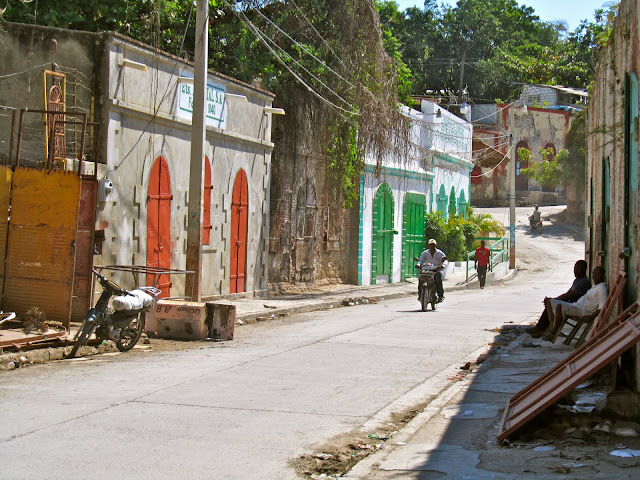 Our street in one direction 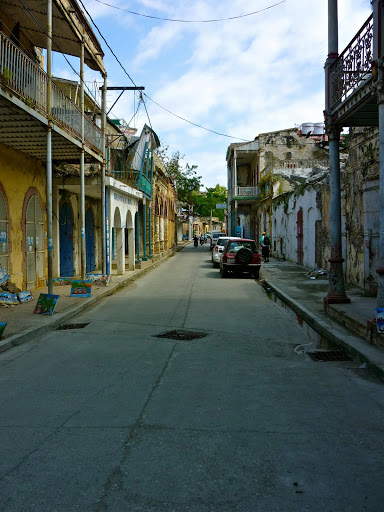 Our street from the other. 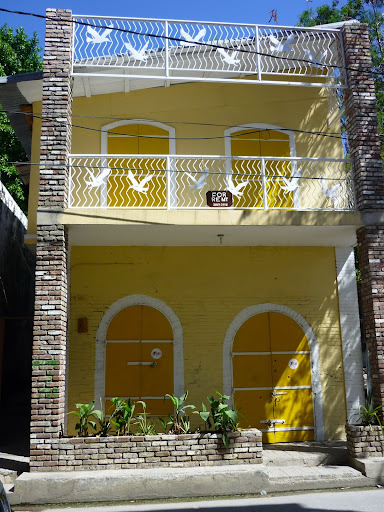 Home sweet home! We get the balcony! This makes me happy. 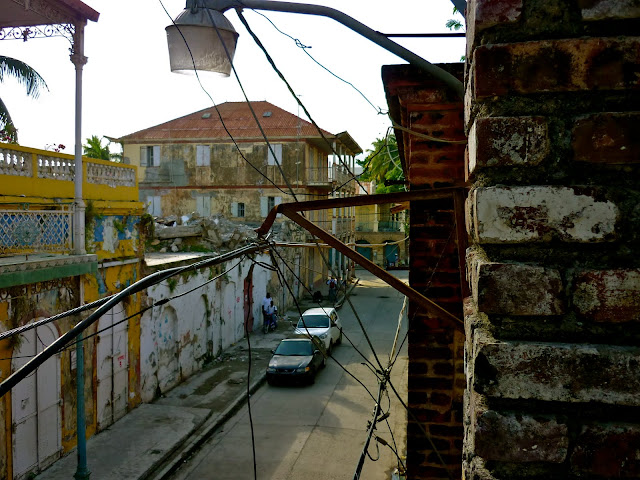 Views from the balcony 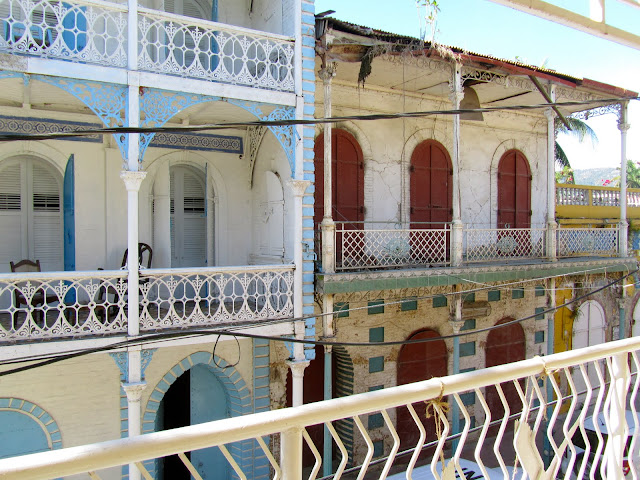 More views. The blue balcony belongs to the hotel La Florita across the street. I love that place, and we basically live there. 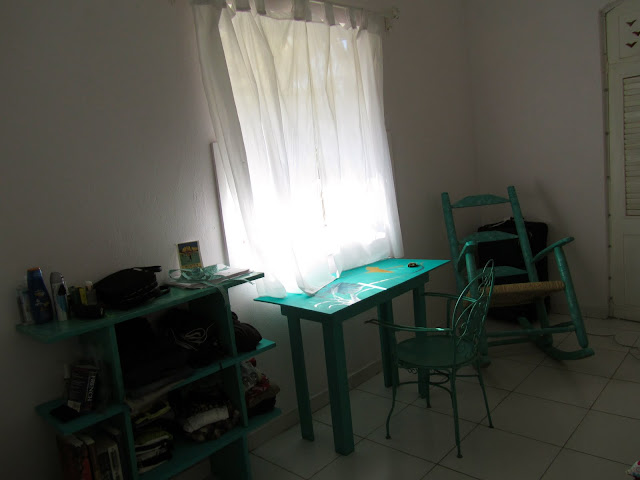 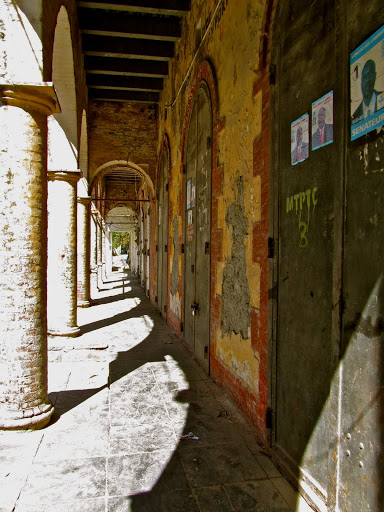 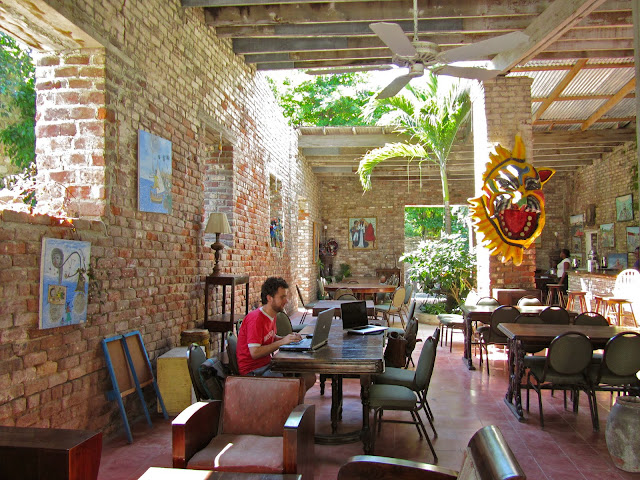 Our second home- the hang out area at La Florita. And yes, that is most definitely a giant hole in the ceiling. 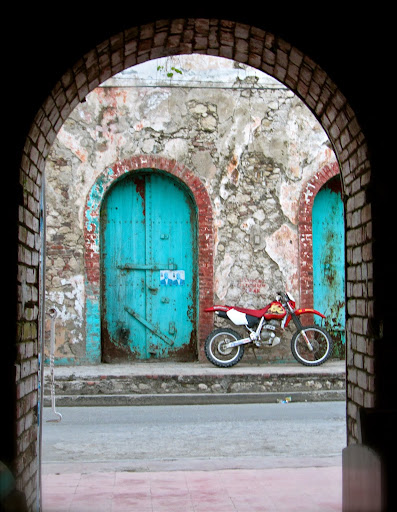 I love the green of these doors. As seen from my perch at La Florita 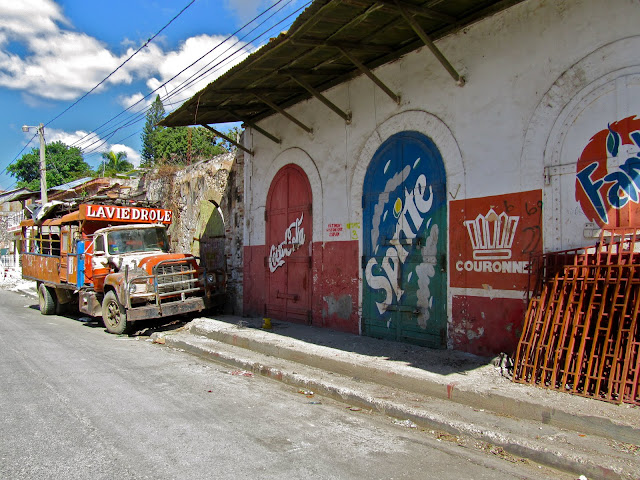 Burned out tap tap (truck taxi thing that hauls around seemingly impossible amounts of people) down the street from ours. I’m sort of obsessed with it. Bear with me… 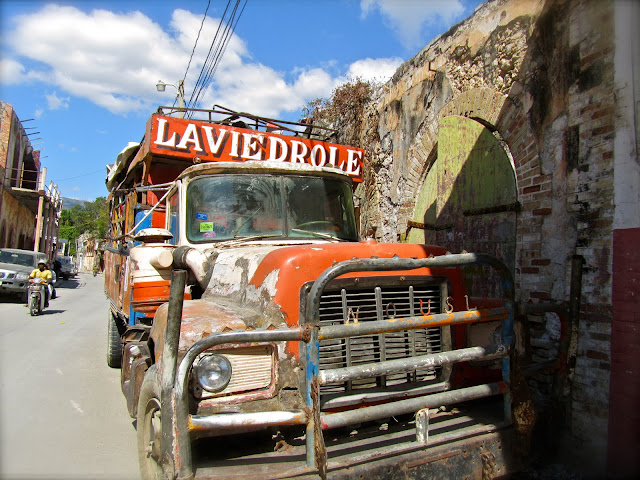 This thing is just so awesome! 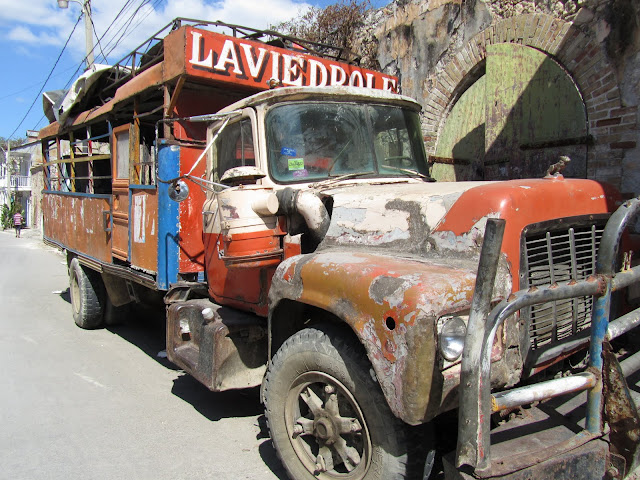 Sorry, I swear this is the last one. 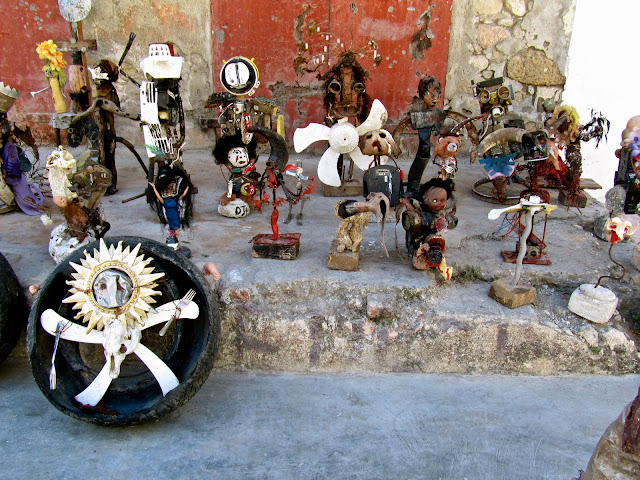 There are a lot of artists in Jacmel (one of the reasons tourists used to come here). Most of them do very literal, often fairly violent and disturbing stuff (even if quite beautiful). This guy is set up across the street from us. I find his work is crazy/amazing/terrifying. 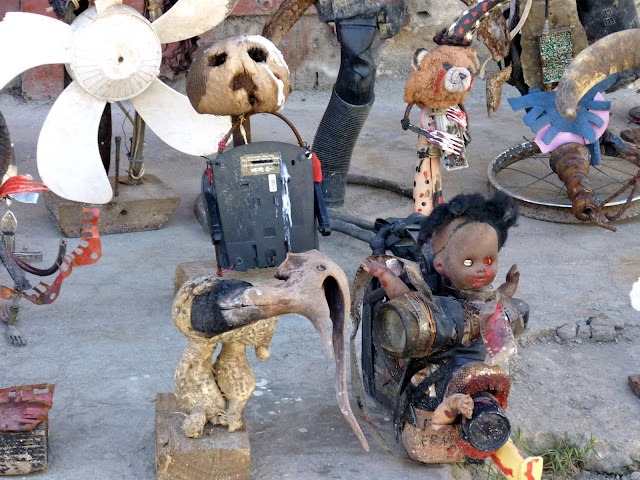 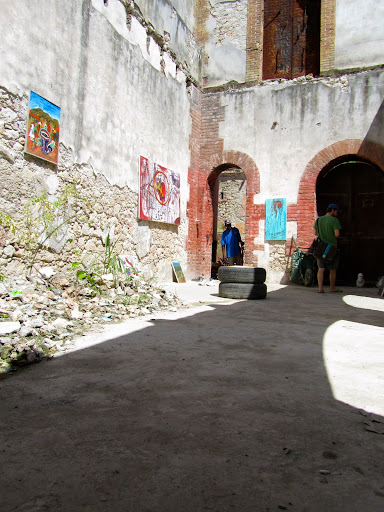 This is a fabulous open-air gallery in a shell of a building that I absolutely love. Something about it, says a lot to me about the Haitian spirit.

Moving on, I took a few photos on a beach-side jaunt, just down the street from us: 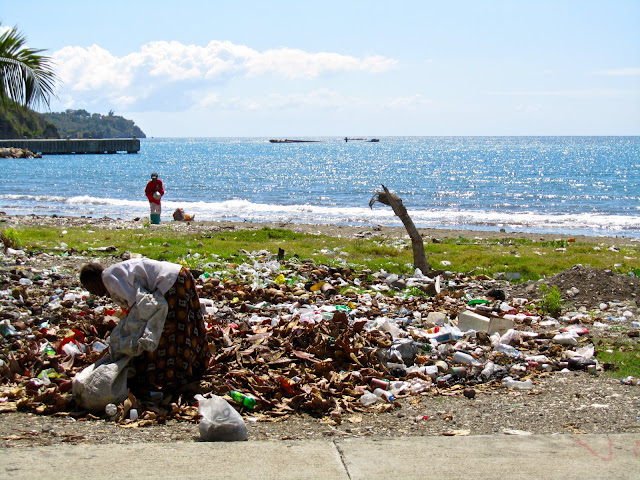 So pretty. But so dirty… It makes me sad. 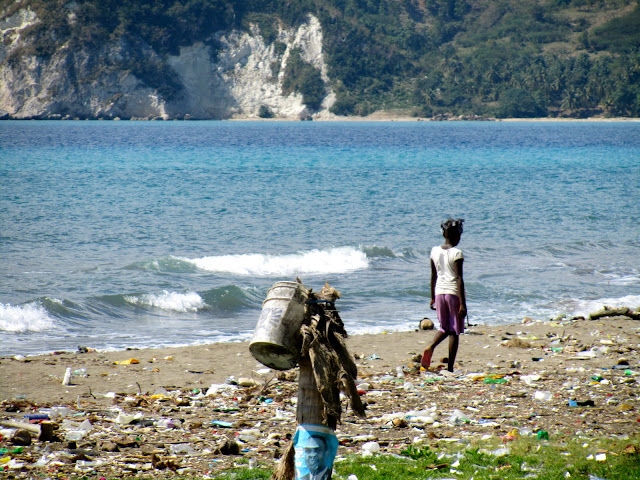 Walking down the beach barefoot. Definitely not my cup of tea. 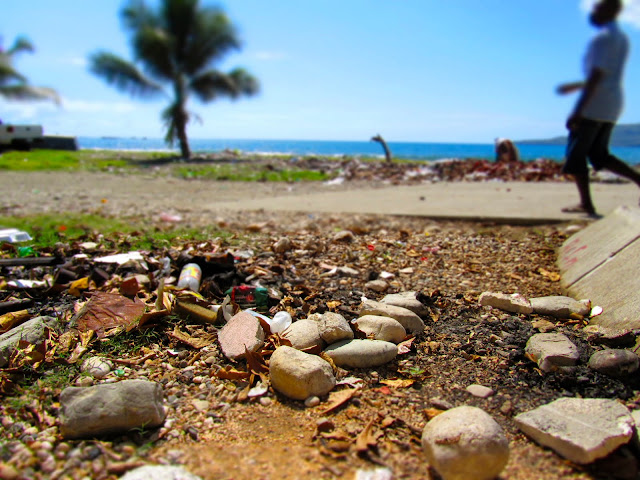 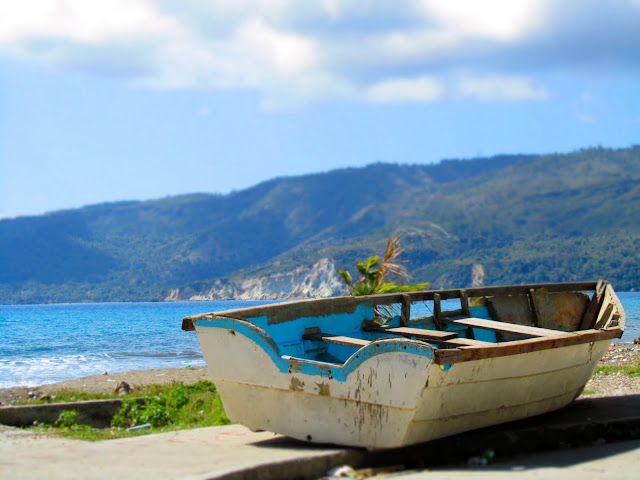 Once again, it could almost be paradise 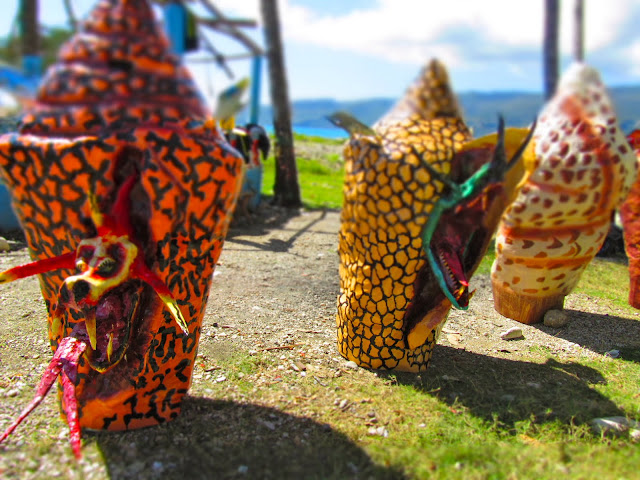 Some carnaval masks in progress being constructed along the beach 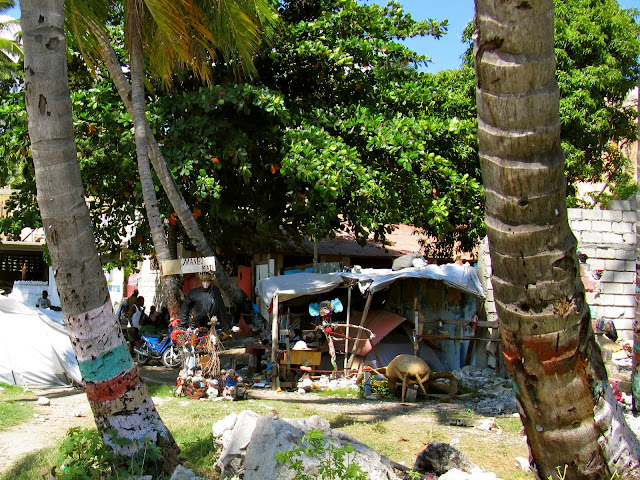 I didn’t manage a very good photo here, but that figure thing on the left is a voodoo alter set up in front of some tent houses on the beach. Super interesting.

Life hasn’t really been about sightseeing though. I’ve actually spent most of my time thus far shuttling between meetings, the office, and trying to figure out what’s going on. I’ve gotten to visit some of the CTCs and CTUs in the immediate region (where they are treating cholera cases), and I’ve been meeting up with loads of people just trying to network.

There’s also been some excitement around here because of all the demonstrations and protests that have been occurring. Some of them have been directed at Minustah, but most have just been in the way of getting anywhere. It’s been an interesting experience to say the least. Here’s some work-related photography: 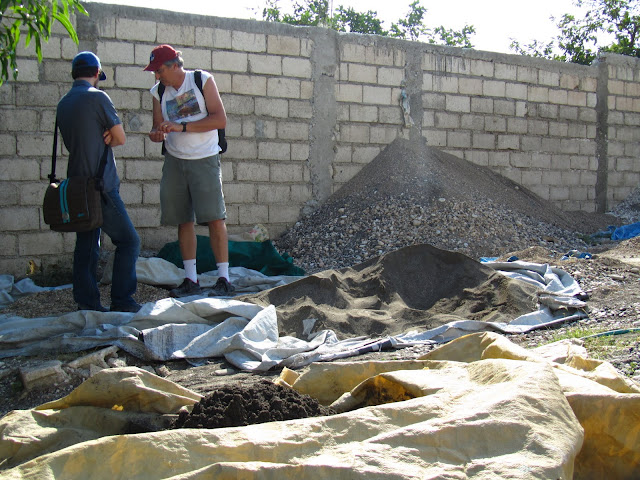 Learning about bio-sand filter construction at an NGO field site 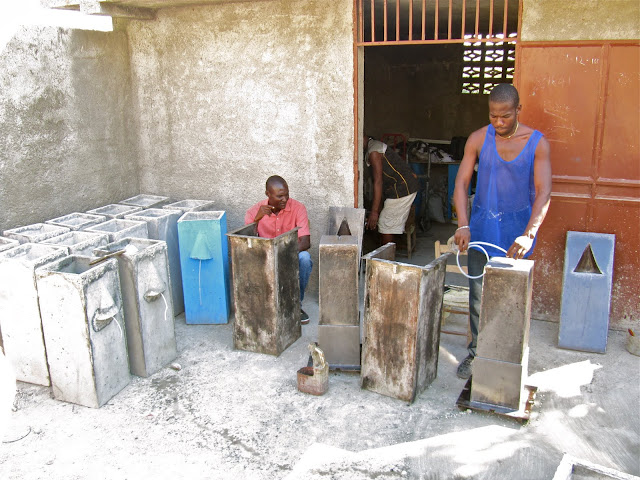 Making the cement forms for the filters 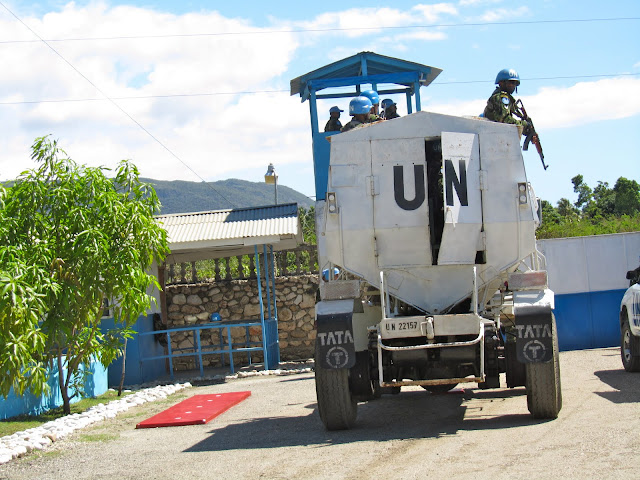 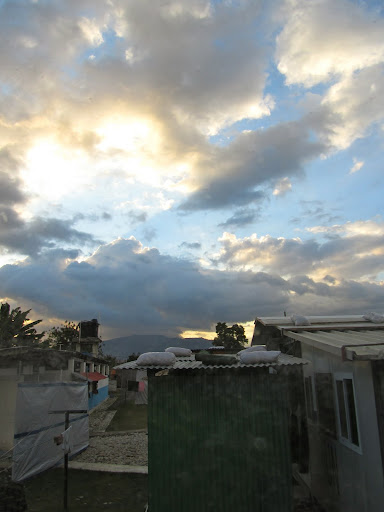 The rain is coming. As seen from the (borrowed) office window 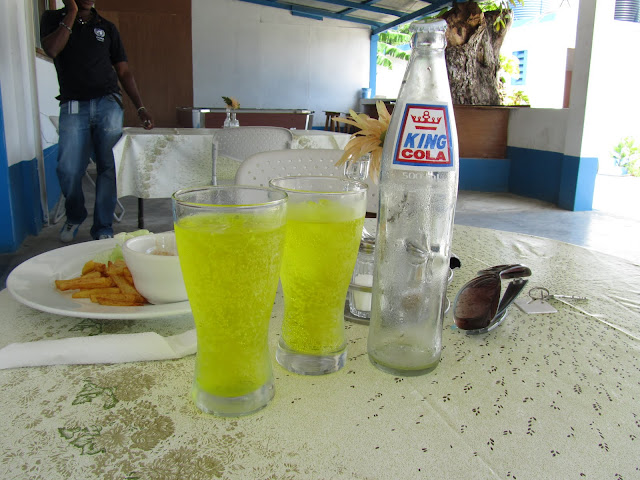 Taking a break. The joys of radioactive yellow, banana cola. 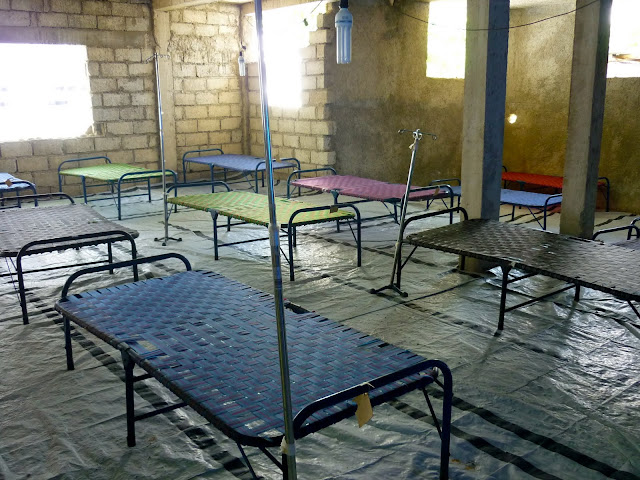 Empty beds at a cholera treatment unit. This is a good sign. 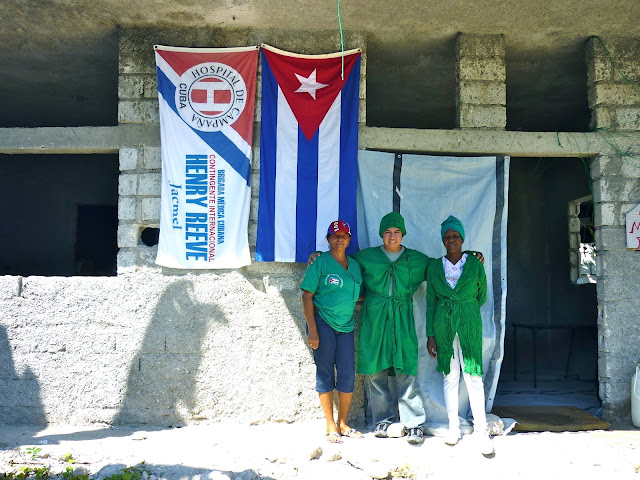 One of the teams from the Cuban Brigade. They are doing amazing work all over the country here. I've been uber impressed by them.

Some final observations about my life in Haiti thus far:

So, yes, there’s many, many more things I could talk about, but I think this post is plenty long for the time being. I have about a million and a half photos of this weekend’s exploits (specifically in terms of carnaval amazingness!!!), but I’m going to post those separately, so as to keep you on the edge of your seats begging for more. Yes, yes, I know. What a terrific cliffhanger. It’s true (although it’s really mostly because I know that the majority of you reading this haven’t even gotten to these words I’m typing right now, as your attention span is only slightly longer than my own).

Carnaval in Jacmel, Haiti- bright festive and amazing »
« Welcome to Jacmel- playing on our day of rest.