Okay first off, I was going to write a story about things that’ve been going on with life in Jacmel, but not much has really happened. It’s a sleepy seaside town for the most part, and life doesn’t generally change all that drastically from day to day. I mean, the biggest thing of note as of late has been the installation of a traffic light. We now have one. And it appears to operate. It’s really a pretty amazing thing, actually. I feel a bit like Jacmel’s moving up in the world. It’s in a rather odd place, though (the traffic light, I mean). While on a main road, it’s not actually in the middle of town or in one of the most congested places, which is slightly confusing, but as I really don’t pretend to understand much yet about Haitian logic, I’ll just say that I’m sure that much planning has gone into it’s placement.

Also of note, is that we’ve been watching the workers at our office cut the grass. With scissors. It takes days. And would be sort of hilarious, except for the fact that while they’re leisurely sitting around cutting the grass in one small spot for hours upon hours, there is not enough personnel to clean the offices or install any of the many things we have been promised over the last few months. Efficiency may not be the strongest of suits here, it’s true.

So I’ve spent the last few days in Port au Prince for meetings. I can honestly say that since my arrival in this country, I have never envied the people in ‘the city.’ I was always quite glad that I was far away from the constant traffic jams, the extreme chaos, the fact that you just have to move from one compound to another, and the commute. I mean, I still don’t like those things. We have it good in the southeast in a lot of ways. We get to live a more relaxed life, and have our choice of any of the amazingly gorgeous beaches surrounding us. Over the weekend, however, I began to suffer from Port au Prince envy.

It’s an insidious phenomenon. Basically, what happened was that on the way back from the office to a colleague’s flat, we stopped at a supermarket. Like a real supermarket (we don’t have any of those where we live). Like the most massive (two floors!!!), I-can-get-anything-in-the-world-that-I-want, supermarket. My jaw may have actually hit the floor before I even entered the building. I mean, there were things I had a hard time finding in Geneva there. It was crazy. And I totally turned into a 5 year old in a candy shop. It was ridiculous. And now I wish I had gotten more things.

And then, to top it off, there were the parties. I mean, an actual real, normal-like social life is already a thing of wonder and awe, the likes of which haven’t been part of my general existence in far too long, but even so, I was far too amazed. The life of those in Petionville is like another world to me. And it is dazzling. And it shines. And I sort of want to be a part of it all too. 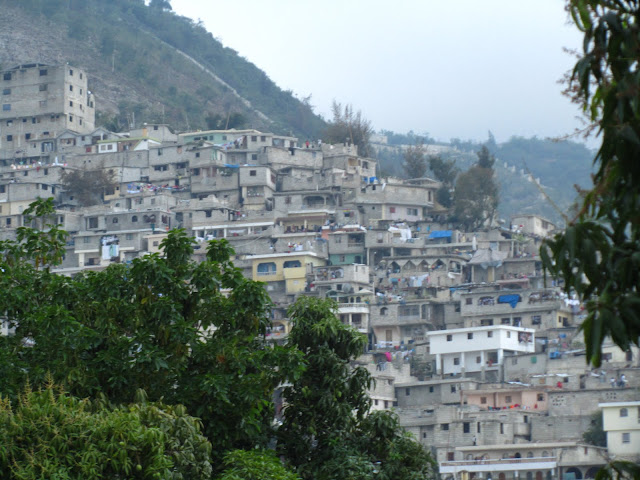 The view from a friend's house in petionville

I mean, there are all sorts of places with live music, and dancing, and fun, and excitingness. We went out one night to a cuban bar/club. Which was obviously amazing, and we stayed out far too late. Another night we randomly found ourselves at an expat party. It was like walking onto the set of a film. It was a pink party, so it goes without saying that everyone (you know, except us) was dressed in pink, and there were pink drinks, and pink balloons, etc and ad nauseaum. But it was set in a crazy mansion with giant foyers, and marble floors, and big columns, that people actually lived in, and there was a crazy-shaped pool, and dj’s and craziness, and it felt like a dream.

The next morning, however, I felt like death (I hadn’t been feeling well for the past couple of days, so no, I wasn’t hung over), and we had to drive back to the southeast. I was not a very happy camper, let me tell you. But at least the city, as usual, was interesting to watch as we passed and I tried not to be sick.There were all sorts of fun ‘carrying strange things on your head’ competitions going on. I mean, that’s what they were in my mind anyways. It’s like sometimes it seems people carry things on their heads here just to show that they can (oh and I’m impressed, don’t worry. I totally couldn’t do that and manage not to run into people/traffic), and not because it’s useful or necessary. I mean, I get the sack of laundry, or the box of water bottles, or the basket of fruits and veg sitting on top of your head. What I don’t get was the lady I saw carrying a tiny packet of beans on her head, or the other with her handbag lopsidedly sitting atop her afro. I mean, it’s called a handbag for goodnessakes, it’s supposed to go in your hand!!! But whatever, clearly I’m missing something here.

I was also enjoying the ever present tap-tap creations. I’m pretty sure I spent a good hour stuck in traffic daydreaming about what I would paint on one if I had my own. I mean, there’s so many options! Looking out my window for 5 minutes I saw naked women, Obama portraits, many different religious paintings and themes, some sylised tropical creations that looked like they belonged in the amazingly airbrushed world of the early 90s, and a variety of sport-themed logos. I still don’t know what I’d go with, but I have no doubt as to it’s fabulousness. I think I fell asleep while pondering these deep thoughts.

Yesterday (after our arrival from PaP the day before), we went to the far end of our department for some meetings. Which meant another lovely day of delightful jouncing and teeth rattling roads in the back end of nowhere. I’m also not sure in practical terms what our mission accomplished, but people seemed happy by our presence there, and maybe that’s honestly sometimes enough.People like to feel important and cared for, and sometimes the best way to show that is to drive a million hours to say hello, I get it (sometimes I just don’t always like it). Also, who doesn’t love to wake up at 5am to drive on horrible roads for countless hours while listening to the same 2 C.D.s play in a constant loop? Oh and the C.D.s? Totally the last straw. I’m now definitely on a mission to burn our driver some new music. 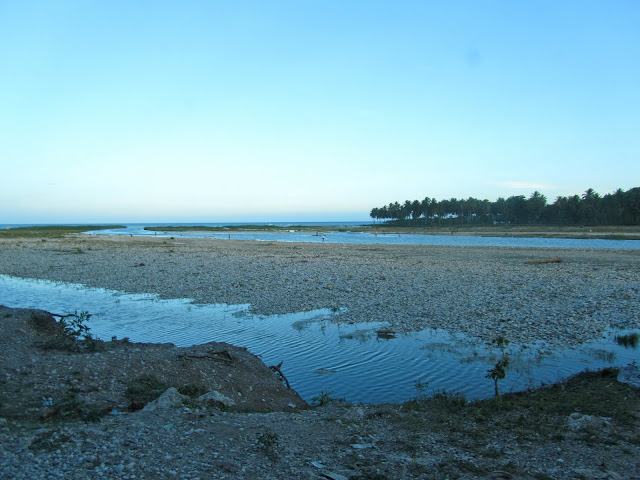 Crossing a river by car

At one point in the meetings though, everything just devolved into Creole, and I caught my mind wandering on more than one occasion (I mean, to be fair, I only sort of understand the Creole at the best of times), while I tried desperately to reel it back in and stop playing peekaboo with the random kids who kept sneaking smiling looks around the doorway at me. But then, people’s mobiles kept ringing, which of course they would answer loudly, despite interrupting an entire room full of people, and I just couldn’t stay focused. I’ve noticed this ‘answering of phones in meetings’ thing in countless countries and cultures, and I’ve never quite understood why people think its an okay thing to do. It’s always seemed a bit beyond rude and inconsiderate to me. In this case however, I couldn’t stop giggling to myself. One of the high up political representatives in our region had two mobiles with him that kept going off. And they have some incredibly embarrassing ringtones on them. Which I thoroughly enjoyed. I found myself actually hoping for his phone to carry on ringing, just for my own personal enjoyment.

By the time we started heading back home, however, it was already late and getting dark. Driving at night here is so much darker than I am used to. I mean, it’s like the entire world is in blackout. You’re on top of a mountain and you know you’re surrounded by some scattered villages, valleys and other mountains, and a vast, vast sky, but because it’s foggy, you can’t see any of it, you can just feel this enormous yawning space around you. It really gives you a feeling of how small you are in the world. This kind of driving is also sort of fun, as when you go through villages you get to see people with candles and whatnot, lighting their roadside stands in little sharply shadowed vignettes, but then you realise it’s actually a giant (and moderately dangerous) game of dodge the cows, goats, and inexplicable herds of people (not to mention the other cars, who only sometimes have lights on, and who careen wildly around blind corners with drop off on one side, paying no attention whatsoever to the side of the road that they are supposed to be occupying) who come to do all their socialising on these treacherous mountain roads that are generally foggy or dusty, thus reducing any potential visibility even further. And then it’s sort of terrifying. I can definitely say that I was pretty happy to climb into my bed/sofa last night, turn on my fan, wrap myself in my sheet, and fall into dreamland.

PS- 14+ hours of on being on the road does not a happy penguin make. I. was. so. glad. to. get. home. You have no idea. For the sake of my much abused bum, I am hoping to take a few days off from road trips. 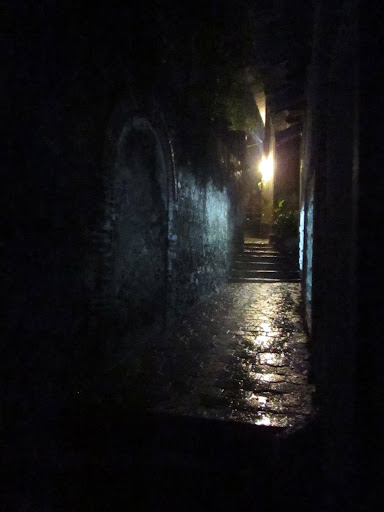 Rain in the alley behind our apartment

HAITI: a journey to the top of the world, beyond, and back again. »
« St Patrick’s day at a Brazilian bar in Haiti, why I love Miami, and returning to the land of work.