So I have tried to write this blog post multiple times. Like a whole lot of multiple times. Clearly though, I  have inexplicably never managed to be successful. I refuse further failure.

Anyway, back about 2 months ago, I wanted to write a ‘6 months in Haiti post’, in which I had all sorts of grandiose intentions to write about what I’ve learned and how things are going, supported, of course,  by a whole bunch of amazing photos.

But then I never wrote it.

Basically, Emily intervened (by not showing up. See prior posts for further details), and then I went on holiday, and then I came back from Europe to discover that almost everything in my little life here had sort of drastically changed (mmmm, excuses…).

But yeah, I’m still catching my breath from it all.

And NOW we’re going on about 8 months. So apparently I’m just being a baby, which is totally unacceptable. Its just that I’m not sure there’s much to say…

I went on a lovely/desperately needed trip home to Geneva (still weird that Geneva would be ‘home’ to me), in which I spent a lot of time playing with a couple of fuzzy monsters that I  missed x 1,000,000, being gloriously mosquito-bite free, packing up my things for movings, walking as much as possible (SUCH a luxury), frolicking in the sunshine  at the lake, and drinking mojitos with friends.  The weather was beautiful (although a bit cold for me now that I’m officially an islander), and my sanity needed the break. 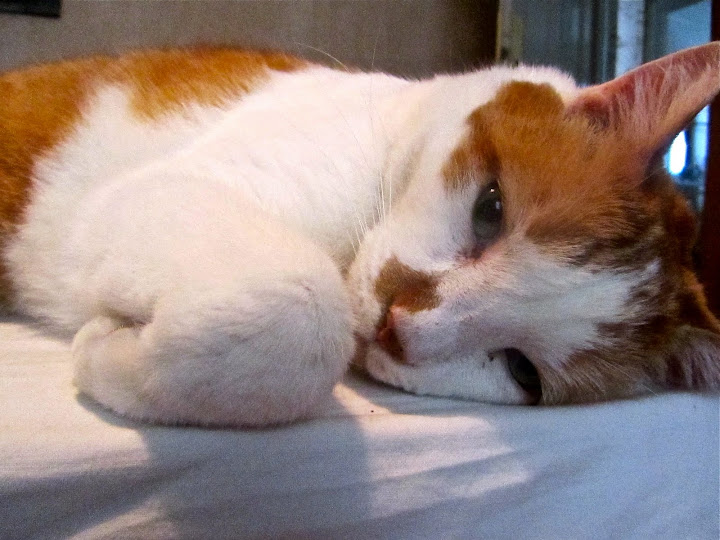 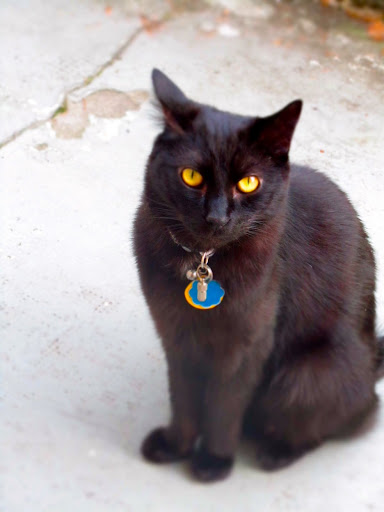 The Small One is handsome though not enjoying the paparazzi. 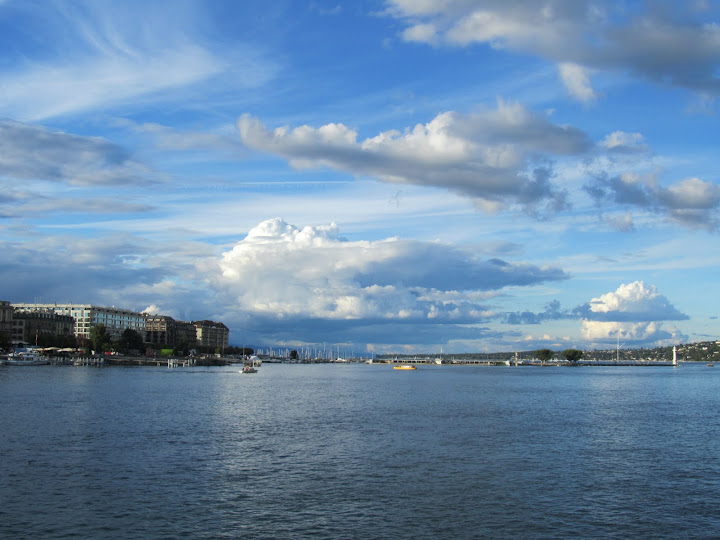 Another beautiful day at the lake 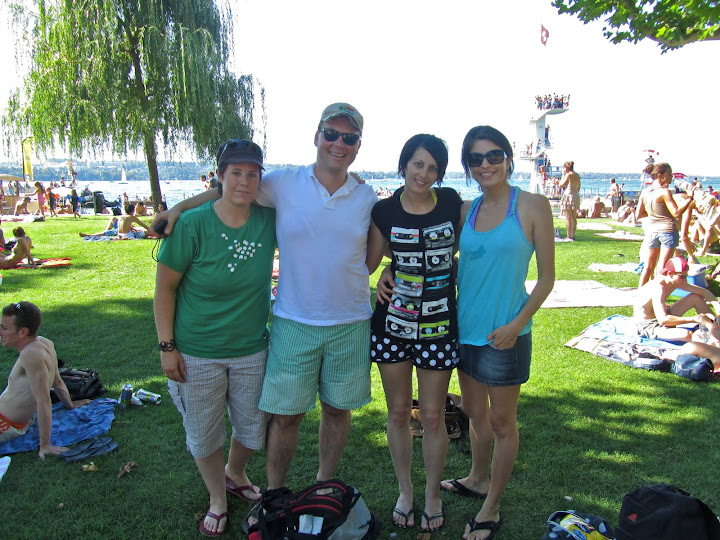 Hanging out at Geneve Plage 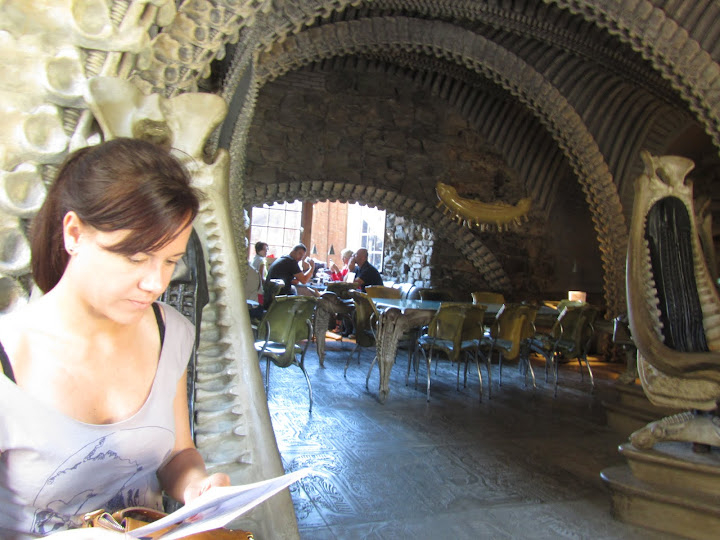 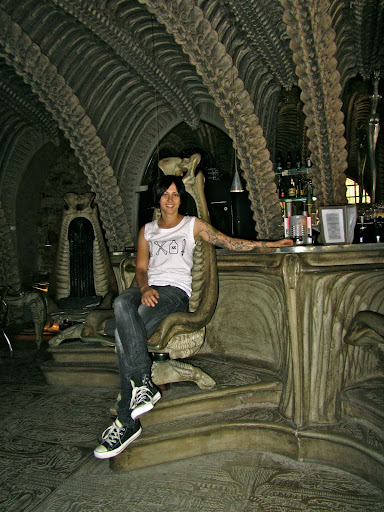 Excited for some Alien-ness (It was super amazing)! 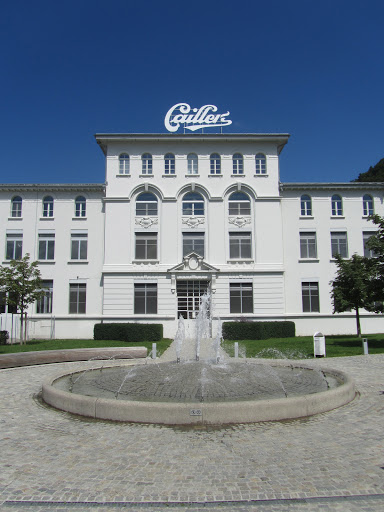 Can I just say that visiting the Cailler chocolate factory = good/the best decision-making? 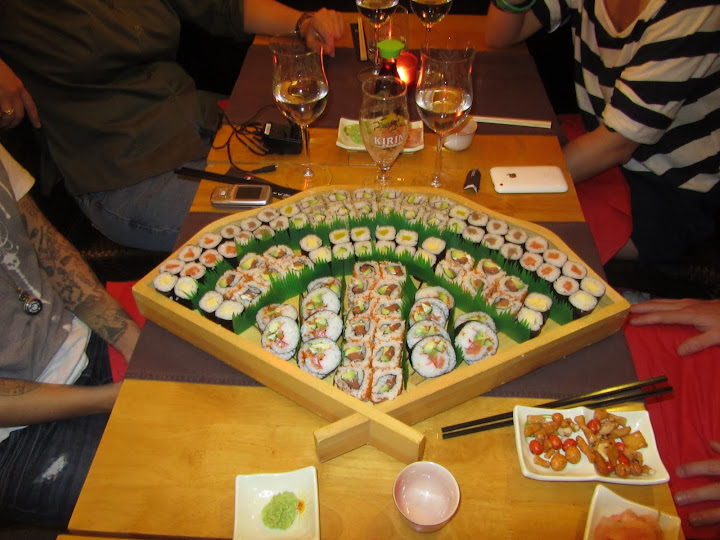 SUSHIS! It may look like we could never possibly finish that much. However... 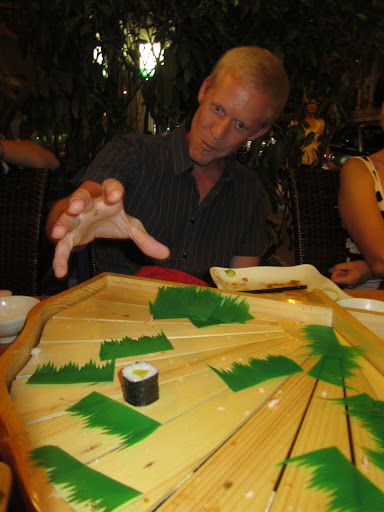 ...The sushis were conquered! 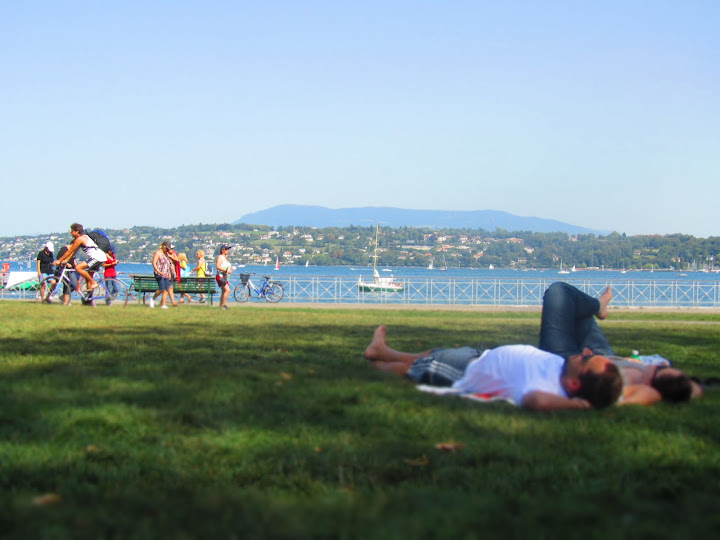 Hanging out at the park 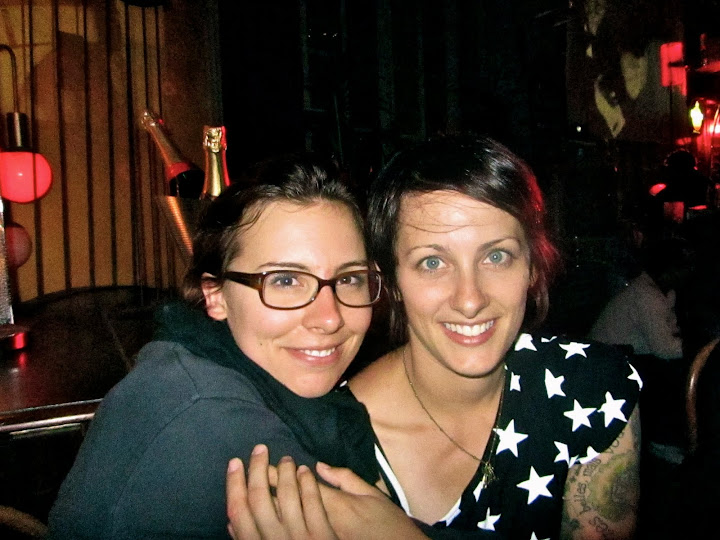 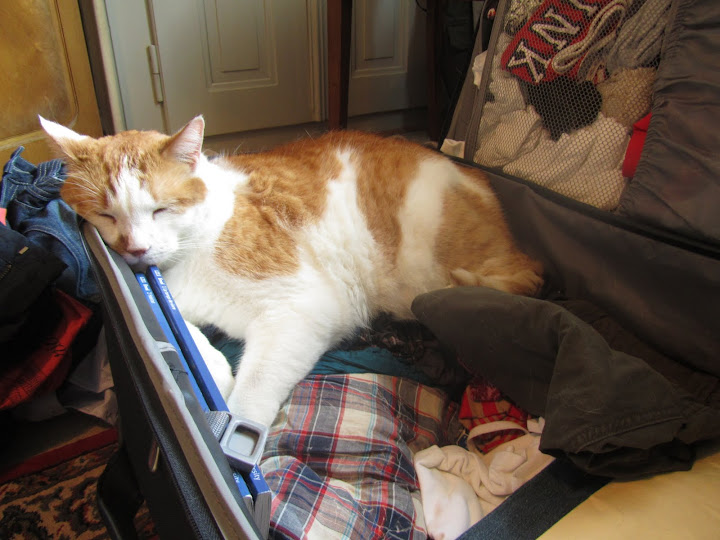 The Large One, attempting to pack himself into my suitcase.... I miss them.

Unfortunately, however, part-way through my trip, The Canadian came to find out that his contract wasn’t going to be extended as planned. He ended up leaving before I came back (sniff)  (and I should also mention that this was partly due to the fact that my trip was extended for both personal and unavoidable reasons- think Irene cancelling all flights to New York…), as did a good portion of my friends in my little town. 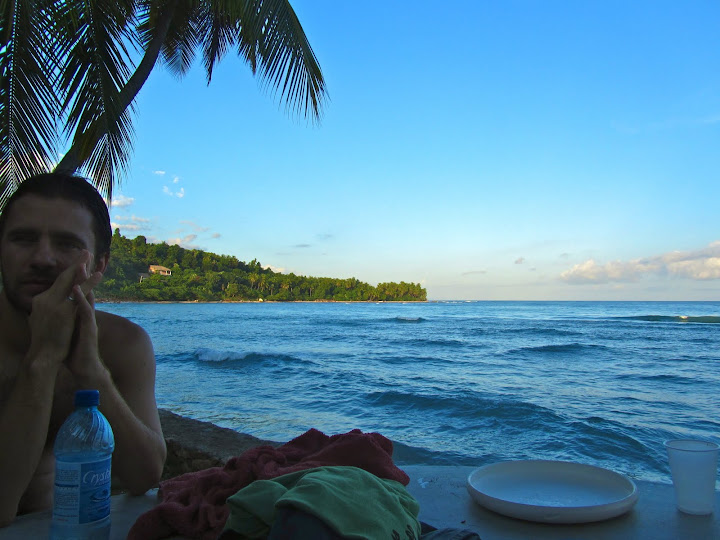 The Canadian relaxing at the beach before I left.

So, needless to say, my homecoming has been a bit bewildering and quite an adjustment. The Canadian, who has been my colleague, my housemate, and my best friend since we both arrived here is gone, and its suddenly very strange not to have the person you are used to being around 96.7% of the time, well you know, around. I no longer have someone in which I can recount all the funny, boring, ridiculous, and obnoxious details of my life to, regardless of any actual interest level in what I have to say (yes, sir, I really must thank you for pretending to listen). I have no one to ‘cook meals with’ (i.e. make coffee or watch him heat up the food that the maid made for lunch), and I also do not appreciate watching True Blood alone. Not as awesome (though still amazing). Nope. Also, when the power goes out after 4 days of both self-imposed and forced confinement in the house with nothing to do, I have no one to go adventuring, play scrabble, or rant with. It is disappointing, and not so much fun. Fact.

Also, work has become more difficult. The staff has been changed out yet again (while I was gone), so I’ve been trying desperately to catch up on old things, finish projects, train someone in a job that I have never done nor know how to do, and meet the regular demands of my work. Its hard for people to keep changing around without handovers, and things are getting a bit messy and frustrating (plus, why do new people never seem to understand that its best not to speak to me for the first full hour of work? Ummm, yeah, I’m not exactly a morning person, per se…).

To top it all off, I’ve spent the last few weeks of my life moving. It starting with the packing of boxes in Geneva, but since coming back, I have moved offices (screw you non-functioning air conditioner!), moved apartments (or rather, was moved. Literally. I came home and unlocked my door to find that everything inside was gone. Luckily I had access to the keys to the other place. I didn’t know I was moving), and moved stock out of the storeroom at the old apartment.

I don’t want to move any more. Like Ever.

My new place is awesome though. Its in the same building, and still a loft, but its just one bedroom. Despite never having really lived alone for any significant period in my life, I really like being there. It has a lot of light and the size and shape of the place just works for me. It’s a bit noisier than the last place, but somehow I don’t mind so much. I actually was quite content to hole up there for a few days, quietly hiding myself away from the world (this rarely signifies a positive thing for me). The cat has had a hard time adjusting though, but he’s surviving, and is still quite decidedly the most spoiled kitten in this entire country. 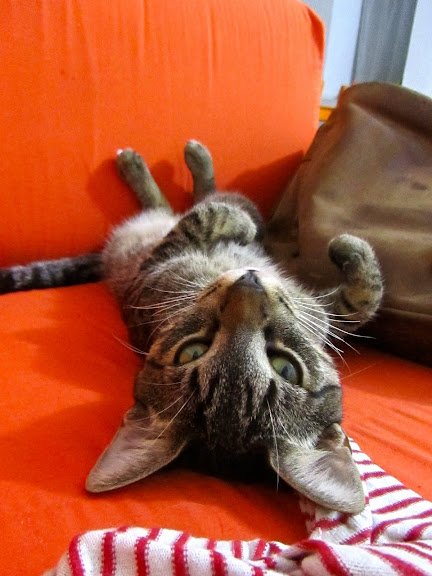 Jac Jac prior to being moved. This is what happiness looks like. And yes, those are my stripey socks. 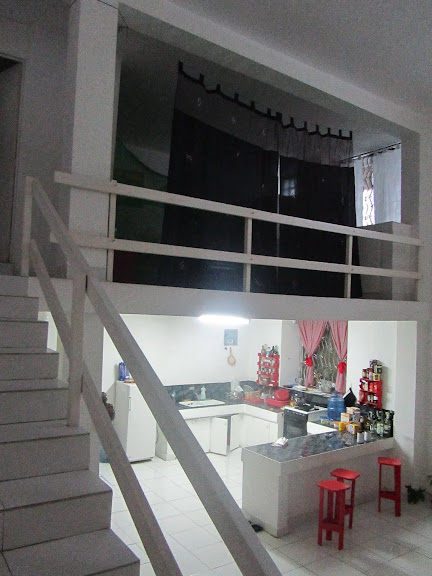 The new place. Not a great photo, but it's amazing.

I should point out that its not that things are oh-so-bad here. I still live in a sleepy little town overlooking the beautiful Caribbean sea, full of artists, and good people (however, I would suggest that the variety of music could be drastically improved upon). There’s some adjustments to be made and some new challenges to overcome, but in the end, I don’t think I’ll be too bad off. Hopefully. 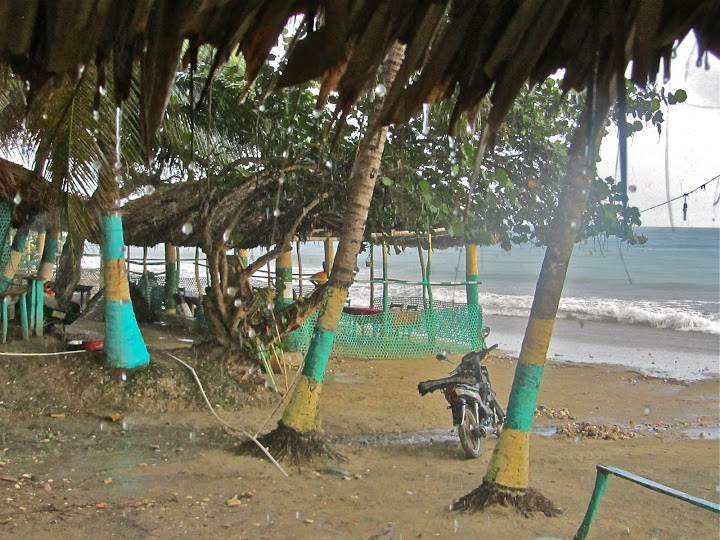 Rainy days at the beach 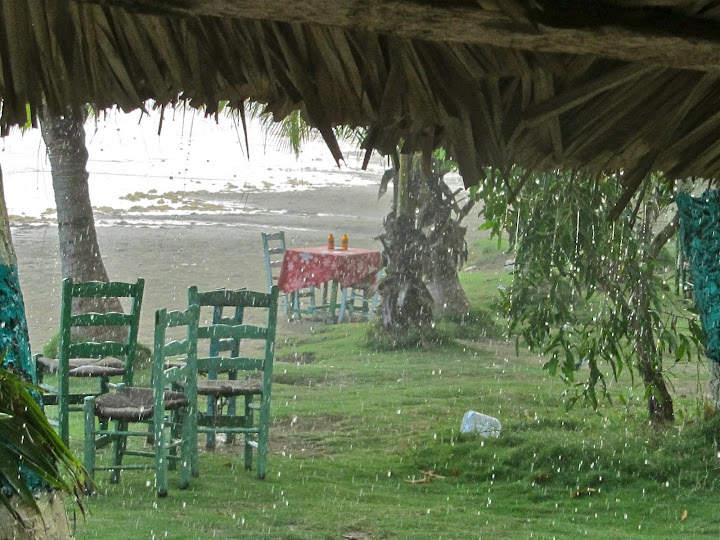 The next step? Well, figure out what that’s supposed to be… And then train the friends I have left to pick up the slack that The Canadian and other people’s departures have left. I have confidence in them… If they would just get back from holiday! 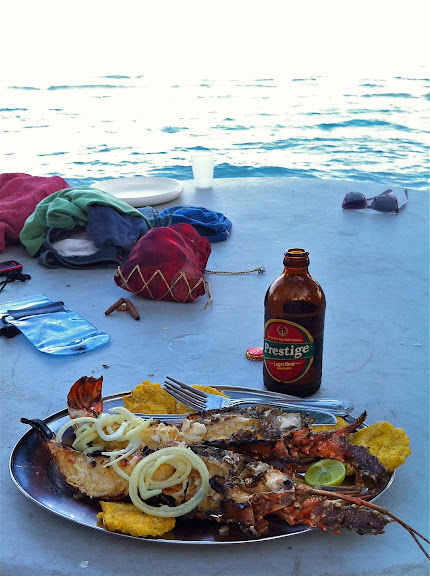 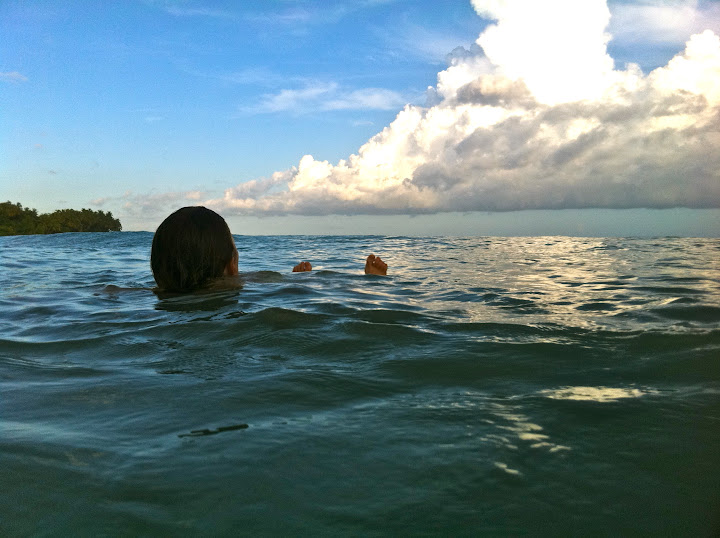 The resurrection of the blog- Destination Congo »
« Emily bails on us: The (non)adventures of Tropical Storm Emily part 3.