I gave my dog boiled brains for breakfast.

Yeah. I totally did. Not even kidding (I even poked the brains with my finger. It was gross. But not as gross as the fact that an English friend from another organisation stopped by while I was feeding her and tried a tiny piece of said brains while my back was turned) (I can’t even make this stuff up!). This is not at all what I was going to write about in this post, but I mean, honestly, how often do you get to talk about eating brains? It is far too tempting… Anyway, here is the proof:

Brains. Clearly. Although I am terrified I might be turning my dog into a zombie. Can you become a zombie from goat/sheep (I am unsure) brains? The base cook left food for her for the weekend (here in wilds of the DRC, one must make one’s own dog food…) and this is what I found. Not really what I was hoping to see first thing in the morning, but alas (at least I didn’t have to prepare them myself)….

Anyway, life here is…. busy…. I’ve been out of town at workshops, and have taken on a second position at my job in what I hope is a somewhat temporary manner… But yeah, lately I’ve been stuck working until all hours and haven’t had a lot of outside the compound time (or time off…). So just to remind myself of what that was like, I’ve interspersed in this post some photos from a hike I took with colleagues to evaluate a health clinic (um no, roads for cars don’t go there. It was amazing- 4+ hours of exercise!!!).
It was a really fun visit actually. We’d been cooped up for days as the zone was being a bit unstable, so it was super exciting to get out and walk through the mountains (I made sure I would be going). My colleagues told me later that they thought they were going to have to carry me by the end of it (apparently I look like a frail little weakling), but it was them dying by the time we got back, and me waiting for them. I may have had a ‘So There’ moment/dance… It was a fun day.

At some point during the hike, I started to reflect on my surroundings. I realised (as I had a number of times throughout my stay in this country), that there were no electronic sounds present; not on the trail, and not in the villages that we passed through. There are no vehicles out there, no televisions, no electricity. Its become so rare in far too many places to have that kind of quiet, and one often fails to notice the constant electric hum all around us until its not there. I mean, this is not to say that people are quiet here. They’re loud and boisterous and constantly debating, and yelling, and not letting me sleep in on weekends because most get up with the sun. Its just a different kind of quiet.

Back to the debating, though; the amount of time I spend deflecting conversations about religion (probably the most prized topic on the table within our field teams) and politics is fairly impressive. And often uncomfortable for me.

We also spend a lot of time talking about the plight of the rest of the world. The team here is used to expats coming and going, and are generally interested in hearing about the other places in which we’ve worked. When I tell people that my last mission was in Haiti, my colleagues almost without fail respond with words of sympathy and concern. We could be chatting in the middle of nowhere, surrounded by shacks, mud, displaced people, and clear signs of poverty and overwhelming evidence of the difficult lives that many, many people in this country lead, and yet they are worried about the people from a little island on the opposite side of the world, who they view as worse off than themselves. Its not about who has it worse, but I can say that most here don’t have it easy, and have been faced with realities I don’t want to ever imagine, and yet their empathy and compassion for others remains. I find that impressive, to say the least, and I think it says something about the strength and character of the type of people I work with.

Life in the middle of nowhere doesn’t give too many stories to tell though, unfortunately. And there is not really a lot to do but work lately. Plus, I only seem to be able to think about the funny little anecdotes I should mention while I’m on one of my many long road trips from one base to another… But I’ll try to get past the writer’s block…

Imagine waking up to this view every day

For instance, I had a weird experience the other day with a crazy (and I mean certifiable here) old lady. I was going out for a beer with a colleague one evening, on one of my few walks through town to date, when suddenly this woman just grabs my arm. She looks ancient, but may easily have been 20 years younger than my best estimate.

Her spindly arms are surprisingly strong, and her grip feels like it might leave bruises. Suddenly she bursts into song, and leads me (behind the friend I am with), down the slippery mud pathway between sections of our little hillside city, singing all the way.

She won’t let me go, and so finally I stop walking. We’re in the middle of street in the market area, and people are passing by us on all sides, sort of glancing with amusement at her and me. She’s singing in what I assume to be Swahili, but it could be one of a number of local languages that I don’t know. 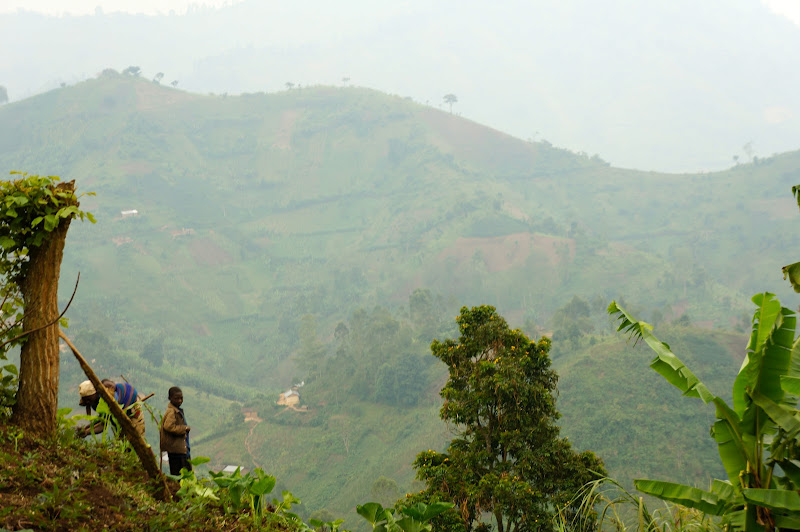 Growing crops on the side of a mountain. Not the easiest task in the world.

I start getting uncomfortable. She has quite the grip, which shows no sign of letting up, and I have no idea what it is she wants from me. Her song has begun to take on an insistent chanting quality, and I have the uncomfortable feeling that I have somehow managed to involve myself in some semi-religious moment of sorts.

The jungle section of our hike

She’s staring directly into my eyes now. When I try to look away in pretend amusement or embarrassment, or I don’t know what, she takes her other hand and pulls my face back to her eyes, which seem to take up a vast majority of her wrinkled face. I am totally at a loss at this point as to how to extricate myself from the situation. My friend is doing nothing (he doesn’t even seem to realise it is happening).

Photos cannot do this view justice. At all.

Finally, someone else passing down the hill says something to her I don’t understand, but which begins and ends with ‘Maman,’ and puts a couple small bills in her hand.

On these hikes I quickly became the novelty of the day. They don’t get a lot of Mzungu’s here (apparently, I was the first ever to make it out to this particular health clinic).

She doesn’t even seem to notice him, as she never breaks her gaze from mine, but as abruptly as this has all begun, it stops. She smiles warmly at me, pats my face with her free hand, lets go of my arm, and continues slowly down the road without looking back, as if nothing ever happened.

We managed to have a constant stream of people watching us, although I’m not exactly sure where they kept coming from!

I look at my friend for an explanation, completely at a loss for what just happened. He just shrugs his shoulders as if this is a normal thing, and keeps on walking.

Once we arrived, we tried to have a ‘private’ meeting with the clinic staff. As evidenced by the audience here.

We arrive soon after at our destination; a guesthouse/hotel where we can stop and have a beer in the evening. It wasn’t until we’d been sitting down for a few minutes that I noticed there was blood all over my arm.

People REALLY wanted their photos taken. Every time I tried to take pictures of ‘the clinic on top of the world,’ people would rush to get in front of my lens.

The lighting was practically non-existent there, so it took a minute for me to figure out what the dark, sticky substance was. As soon as I did, I looked for the source. Upon finding none, I realised it was in the same place that the old woman had been grabbing my arm.

Here we go again. Behind them is one of the clinic buildings that I was trying to photograph.

Maybe I have spent too long in places where people practice religions like voodoo, and/or where blood is often part of ceremonies, but my immediate reaction had nothing to do with sanitation or any superfluous concern like that. Instead all I felt was a little shiver down my spine along with a million little nagging questions in my mind about what had just happened.

I finally gave up and just took their photos

I mean, I’m sure it was nothing. I have no idea why the woman was bleeding (or grabbing and singing at me for that matter), and I didn’t notice any blood during the whole strange interlude. So I just found myself some tissues and some soap and water and washed it off, drank my beer, and then tromped back up the hill home.

Its an impressive place for a clinic

Anyway, I haven’t noticed any particularly bad (or even particularly good), juju to come out of the whole affair, and obviously nothing happened beyond a crazy woman grabbing me and singing to me in the street, but I (clearly) don’t get out much and I have a continuously over-active imagination, so it made a strange impression on me that I have dreamed about at least once.

And so begins the descent.

At the very least, I hope the woman wasn’t too badly injured (as I’m still assuming the blood came from her). Since then, I’ve had a number of other walks through town and the surrounding area. Nothing else weird has happened. 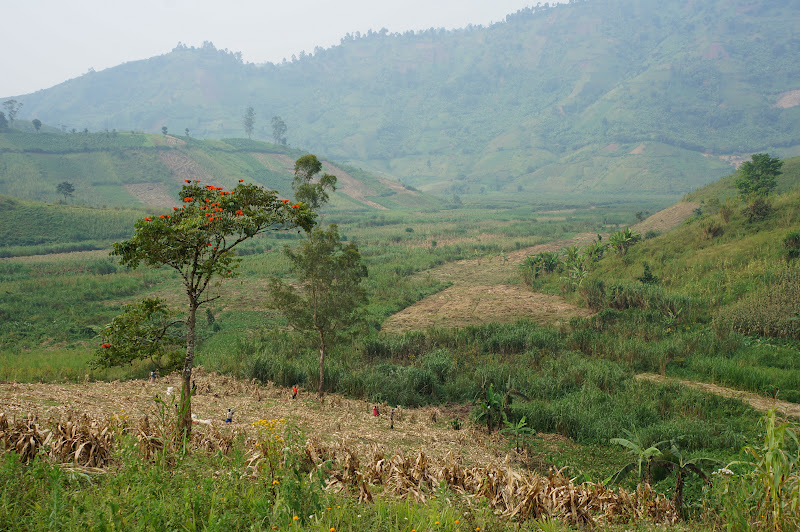 A perfect day/place for a hike

Much to other people’s great amusement, however, I once made my Congolese colleagues stop so we could ‘save’ a goat, who’s tether had gotten all tangled up around her neck and feet.

I also generally manage to inadvertently gather a small herd of children who insist upon following me everywhere and who repeatedly ask me my name (in French) and tell me good morning (in English), regardless what time of the day it may be, while holding my hand/grabbing hold of my shirt (which appears to both delight and terrify them) and conversationally talking to me in rapid-fire Swahili in a way that clearly says they are unconcerned that I understand none of it. Its not so bad here.

Fields everywhere, as we get close to the vehicles and our ride back to the base.

6 thoughts on “I gave my dog boiled brains for breakfast.”