Two weeks in the Congo, and I’ve already tasted Weasel.

This country is beautiful

True story. I’ve eaten weasel. I was actually originally told it was porcupine. And then people tried to convince me it was fox or Gambian rat, but I stand firm, it could only be weasel. Although perhaps I should back up a bit and start from somewhere near the beginning…

First off, the DRC is a photographer’s dream. Like really. I sort of wish I could change jobs and just get hired on somewhere as a photographer so that I would totally be within my rights to ask the driver to stop every 5 seconds so that I could take pictures. The countryside around/between/etc. where I live is absolutely gorgeous. Rolling green hills (green EVERYWHERE), cows grazing peacefully, beautiful lakes, it just doesn’t stop. Sometimes it feels like I’ve just sort of stepped through the primordial ooze and have somehow landed in the age of the dinosaurs. I mean, if there weren’t pesky little issues such as the overall lack of infrastructure and a sadly bleak security situation, I’m pretty sure this place would quickly become a number one tourist destination. Unfortunately as that is not the case, I feel quite lucky to get the chance to visit even a little bit of this incredibly huge country.

During the last two weeks here, I’ve actually gotten to travel around quite a lot. And by ‘gotten to travel’ I mean, my body aches all over and I’m pretty sure I have a permanent case of whiplash, but I suppose all that is pretty much par for the course. I, however, still hold that the roads are (so far, the rainy season has not yet arrived, and I am slightly terrified) better than those in Haiti (Jacmel to Anse a Pitre. Full Stop).

It’s been nice though. I’ve gotten to know the teams at the two bases I will be working at a bit, visited a cheese-making monastery (yum!), went to a lake that we almost flipped the car getting to, and then had to almost immediately turn around and run back to the vehicles because there was a thunderstorm, and attend a hospital opening in the middle of absolutely nowhere, among other things. I’m also doing my best to learn some Swahili (my vocabulary in which is probably now limited to about 8-10 words. Hurray!) and keep my hair from quickly turning into dreadlocks (a losing battle, let me assure you. There is just so. much. dust! I am now rethinking this growing my hair out thing…).

Cheese being made at the monastery. It is delicious. I can confirm.

In terms of living conditions, I am in the process of making some pretty big adjustments here (oh Switzerland, you have made me soft). I’m living, like I said, in the actual middle of nowhere. There aren’t a lot of expats around (and the only one I currently know is the one I live with), and the environment out here is completely francophone/a lot of other languages I don’t speak at all, so that was tiring the first few days (but ultimately will be awesome for rocking French like a native(ish) by the time I leave).

Electricity is based on generators and solar power, so it can be iffy, the internet often just mocks me instead of opening pages, and I get to take a lot of bucket showers with water that’s been heated on the stove. If you can imagine, it’s sort of like a posh camping trip, where you have things like real beds, and a roof over your head, and lights (generally. Dear headlamp. I am so glad you are here. I only wish I’d brought a larger quantity of spare batteries), but you’re still roughing it in ‘the wild’ a bit in terms of thing like the overly-large insects/vermin, meals cooked over open fires, regular use of pit latrines, etc. Also, there are not a lot of things like bars, or places to hang out in (read: none really at all in my main base), so I am quite glad that my colleagues on the national staff are really into hanging out at work even when they’re not working (my office is also where I live) so that I have some opportunities to socialise (and what with a curfew between 7 and 8pm depending on where I am, believe me, that’s exciting).

Anyway, so far so good. I imagine I will get a lot of good film watching and book reading time in on my off hours (dear friends, when the internets are working, I am permanently free to take skype dates. Just in case you were wondering). Also, as the title of this post suggests, I’ve also been given the ‘opportunity’ to sample some of the local wildlife.

Just another beautiful view from the road

So here is what happened. The entire team in one of the towns in which I am living, piled into cars on a Saturday to drive on some awesome roller coaster-like roads to attend a hospital opening that we (and by we, I don’t mean myself here but the organisation, I clearly just arrived) set up. It was a pretty fun day involving some speeches, a dance presentation, me taking a lot of photos, trying to explain my tattoos to people who have no concept of what a tattoo is (yes, I can take showers with them. Yes, normally. No they don’t wash off. Yeah, no, not even in ten years. Imagine that it’s sort of like a permanent painting on your arm. Made with needles. Under your skin. Yes, permanent means it will be there forever. Nevermind, don’t worry about it. I just have a skin defect, thanks for calling attention to it.), some feasting (no sorry, I don’t want stomach, or liver, or intestines wrapped around some unidentifiable portion of meat. No, not even if it’s goat. Thanks though. It looks nice, I promise. Those people over there have been waiting in line for a bit, perhaps they can have my portion), some beer (don’t ask me about trying to use the latrine in a HUGE crowd of people who are super interested in the fact that I am clearly a foreigner), a lot of making fun of each other between cars via the radio, and a quick visit to a waterfall.

Just a portion of the people who came to the hospital opening. I couldn’t fit them all in there were so many!

Dancing at the opening

I love taking photos of kids here. They really want their picture taken and are all smiley and excited before the shot, and then when you look back at what you took, you find expressions such as these…

Take 23 or thereabouts. Apparently my attempts to convince these kids to smile just wasn’t getting through. I am sorry though, future photographer trying to visit this village, I didn’t realise how hilarious and catchy it was to say un, deux, trois before snapping a shot. I’ve ruined them for life…

Along the way back, the car in front of us stopped near a group of people. They had some sort of dead animal with them. At first everyone in my car tried to tell me it was a porcupine. I must have looked dubious (there were no spines…), because then they told me it was a fox. Or a Gambian rat. I told them it was quite definitely a weasel, and that I didn’t think they were usually for eating. But I didn’t know the word for weasel in French (belette), so they explained to me that I must mean it was some kind of fox. I didn’t, but whatever (and are foxes normally something that people eat?). We decided to agree to disagree (see photos below for my proof of its weaselness). 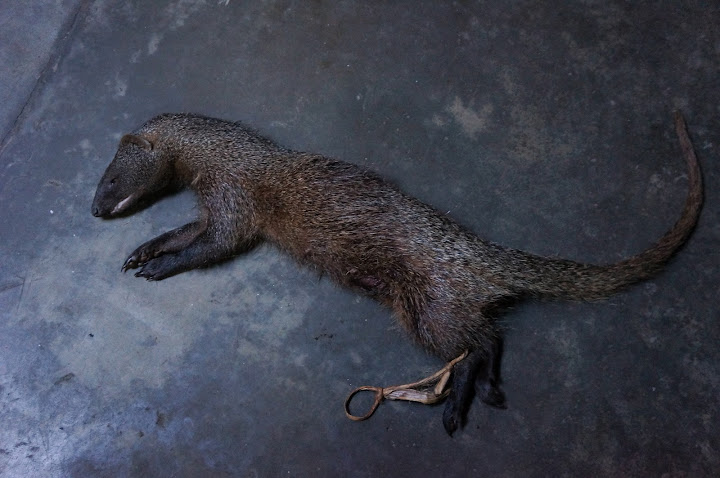 Totally a weasel. I mean, right? I can send shots of different angles to anyone still on the fence about this.

An Ivoirian colleague then decided it would be a good idea to buy this animal and eat it at the little party we were going to have with the team since no one had eaten/seen one these animals before (I mean, clearly a good reason for eating it?). So when we got back to the base, our resident rasta chauffeur started to barbecue it (and by barbecue I mean he just put it on the coals, fur and all…). It started to rain though, and because we were all tired from the day’s journey, we decided to postpone the big event until the next night.

Which is when I ate a bit of weasel. Mostly to defend my field-worthiness/how hardcore I am. It was a bit chewy. And it needed salt. The end.

Because I didn’t think I should end this post with a photo of a dead weasel. This lake is pretty, and we risked our lives (i.e. the life of the car) to get here.

I’ve just been made aware, that my weasel might actually have been a mongoose. A very weaselly mongoose. Here is the proof I was given. Should I change the title to ‘Two weeks in the Congo, and I’ve already tasted Mongoose?’ I’m not quite sure it has the same ring…

One month in the Congo: Over homesick weekends »
« The Switzerland of the Congo

6 thoughts on “Two weeks in the Congo, and I’ve already tasted Weasel.”