One month in the Congo: Over homesick weekends

On there way to somewhere (all the images in this post are from a few weeks ago. It seems I keep surpassing my limits on photo upload sites. As soon as I have a moment, I’ll sort it out).

There are days when I feel so lucky to have the chance to fly around the world and meet new people and learn all sorts of new things (most days), and then there are times (generally when I’m still adjusting to a place- as in right now), when I think about all my friends I knew a different world ago, who stuck around wherever and get to have normal relationships and normal lives, doing fun normal things on the weekend and in the afternoons (the downside of facebook when you’re an isolated aid worker, let me tell you). They’re eating the foods I miss, and spending their Sundays wandering through town with friends, or hanging out at a park enjoying the summer sunshine, or I don’t know, doing the things I’m missing out on.

The monastery where I buy delicious cheeses

I am well aware that grass is always greener. And rose-tinted glasses get thicker the longer you’re away. Nowhere is perfect, and to be honest, I often find I no longer fit in the same way in the places I’ve left behind. I can sometimes do a good impression, and I’m sure I could get back to it eventually, but if home is where the heart is, my heart lies in too many places to be certain I know what home really means. My oldest and best friends have taken different paths from me, we have lived different lives and experienced vastly different things, and I sometimes wonder if we can really understand each other any more. And if that is the case, then where does one go back to? I do what I do, and go the places I go, because it is what I want to be doing, I enjoy doing it, and I honestly don’t really know what else I’d be doing if I wasn’t doing it. But then, there is The But…

A friend preparing intestine laden delicacies. Always with the intestines! Why!?

And all I know, is that today I would give just about anything to hang out in the sunshine by the lake (in Switzerland, I’m imagining (strangely)), eating bread, fruit, and cheese and drinking wine, while laughing with all the friends I love from all over the world.

Hanging out a lake. I don’t know what I was upset about. We have lakes!

But then, thankfully (seriously, make it stop), I quit feeling sorry for myself, because my colleagues who are also ‘camping’ on the base, drag me out of my room and away from the work I’ve been doing all weekend (I think that is where it all started to go wrong, to be honest), and cook me special food for lunch as a surprise just because they’re those kind of awesome people, and we go play volleyball at the UN base, which turns into an epic shoot-out in which I score a lot of goals (and during which I gain new-found respect from the many guys I work with). Then, we decide to ‘enforce’ a party on the houses of some of the other colleagues who don’t live at the base and I realise that they are far more deserving of the camping title then I am, and have also left their families and friends behind in the many different cities they come from, and therefore also get lonely/feel left out. 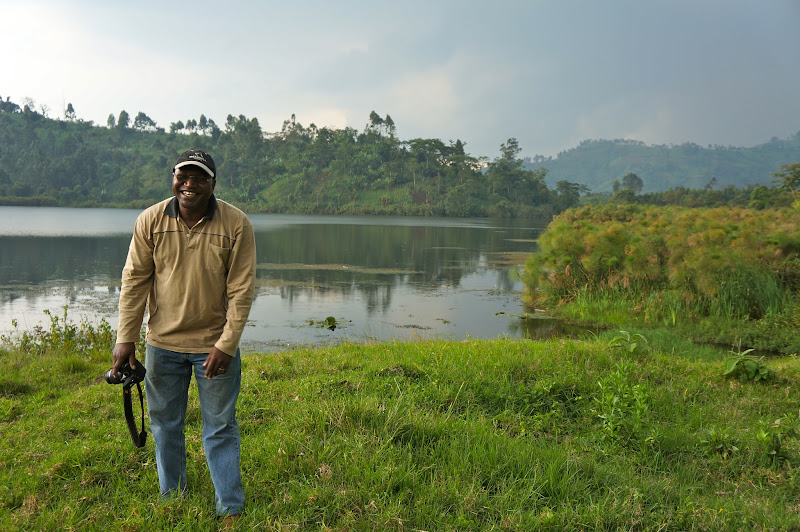 The best lake photo. That was definitely another good day.

And then after all of that, we go to the one bar in town that we go to (mostly for lack of other options), and I’m taught random words in Swahili that make people laugh (and which I forget almost immediately), and we dance and have weirdly sweet Ugandan beer that I’m not sure I like, until we finally return to the base and watch early Walt Disney shows in French (like early in the way that they’re featuring cartoon versions of people such as Shirley Temple), and everybody laughs at all the jokes I probably laughed at when I was a kid, and I realise that even if I do miss out on a lot of things that were supposed to be part of this ‘normal’ life that I’m not convinced even really exists, that I honestly have it pretty awesome. And even if I complain here or there (and who doesn’t, let’s be honest), I shouldn’t ever take these experiences for granted (yes, yes, that was fairly sappy, I’m aware), and I really don’t want to give them up.

Love this view so much

Yeah, it’s been a pretty great day in spite of it all (and by that, I am of course meaning in spite of me). And you know what, what a great way to mark one month in the Congo.

Dancing and a singing.

(Note: I do however wish that the large, scary, black insects that look like GIANT KILLER BEES would stop sneaking through the cracks around my bedroom door and continuously dive bomb me. Everyone here swears up and down that they won’t bite/sting/MURDER ME IN MY SLEEP, but I am more than slightly dubious. And very, very afraid… My current strategy after ‘ushering’ the last interloper outside with gentle pats from multiple flip flops: put on large coat with hood up, turn off all the lights, turn computer screen to very, very dim, and type from under the mosquito net protected bed. It seems to be working thus far. And, NO, I’m not at all ridiculous, so there.)

(Update: despite all precautions, the terrifying proto-dinosaur bee creatures infiltrated my room anyway after I officially went to bed. They of course then immediately regretted their actions, as I had no light or whatever it was they were searching for. So then, they spent many hours ramming themselves against my door trying to get back out. I refused to get up and help them because I was afraid they might mistake my intentions and eat me. So needless to say, between the dive bomb attacks that went late into the night on the metal roof overhead, the battering ram wing action going on inside my room, and the loud snoring perpetrated by every single one of my colleagues sleeping in the rooms around me, there was not much sleep in my life. Oh well. Sigh.)

2 thoughts on “One month in the Congo: Over homesick weekends”